Posted by Richard Maver on March 25, 2016
Krista Papista is a self-described and self-progressive 'sordid pop artist'. Based in London, she incorporates multi-faceted and cross-genre layers into an eclectic production. By also being a video director, artist and all round creative, she maintains complete control over her rather direct and unwordly vision. Case in point, her new self-released 'I Wish I Had Blue Eyes', an audio-visual project (in collaboration with Blør) released last month. Revolving around the bizarre interest in the rise of fetishes for middle aged men in suits, the video explores the nature and curiosity of masculinity. The video depicts an anxious man being taught the rites and 'rituals' of his masculinity by a younger lady.
As for the song; it's an unsurprisingly odd and disorientating piece that somewhat aligns itself as the missing piece of a horror film. The progressive nature of the song portrays the 'no genre boundaries' approach she has become accustomed to. The textured and dazed output is in no way ordered, as it descends into gibberish at the end. With a few listens, you could argue there is an obscured melancholic undertone, but that's up for debate. 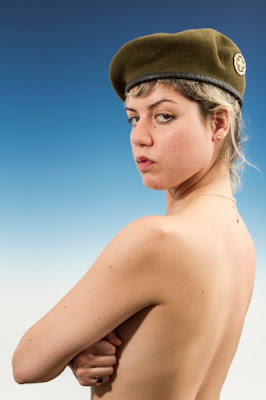 Confused? Interested? Take a look and let us know what you think. At the very least, this will get you thinking.
Released by [THE REST IS NOISE].