[INTERVIEW] with... I Heart Sharks

Posted by Benjamin Brown on April 11, 2016
We interviewed I Heart Sharks' Pierre and Craig ahead of their show at Munich's Strøm.

You've just returned to the independent label  AdP Records. Could you explain that decision and tell us how that changes the way you make music?

Pierre: We were with Island for one album, it was great experience! But looking back at our time as a band, we've just always done everything on our own, with our own money, in our own bedrooms, so signing for Island was cool, because it was a good way to complete some projects.
We realised after the album, that that wasn't the way we wanted to make music and decided to go back to the original plan: a smaller team and making music on our own. When we started off, having to do everything by ourselves was the annoying thing – now we've realised that that's what we actually enjoy most.
Island were brilliant with us, we had a great time, but releasing music always took too long. We want to be able to tour, record and release music whenever it suits us – that's what is possible with a smaller label. With our current label we're free to make our own decisions and do what we like. We love our AdP Records, we love the album we did with them, so it's great to be “home”.

The new songs you've put out sound very different to your previous work. Do you still enjoy playing your old songs and identify with them?
Pierre: Playing the old songs is wonderful, it feels really nostalgic. They sound really young and simple. The songs are basically just composed of four chords – we didn't have a bass player, so I had to play bass – but because I wanted to be able to jump into the crowd I programmed four bars of bass line which would just play for ages during the live sets. And the album was based on these restrictions we had, by only being three band-members back then. I love the sound that was created, just because we wanted to party with the fans – we're really pleased that we made that record.
The new album will have more of a “band-sound” about it, it will sound bumpier, heavier.
Craig: It's really fun to play the old songs. We even brought back a really old song “Dots, Dots, Dots” from 2007 - we only played it five times, but then fans started asking for it, so it's become part of our set-list.

You gave fans the option of helping decide the set-list online. Were you surprised by the results?
Craig: We were! It was really interesting to find out what the fans want to hear on tour!
We have our favourite tracks which, fortunately, were also the ones chosen by the fans. 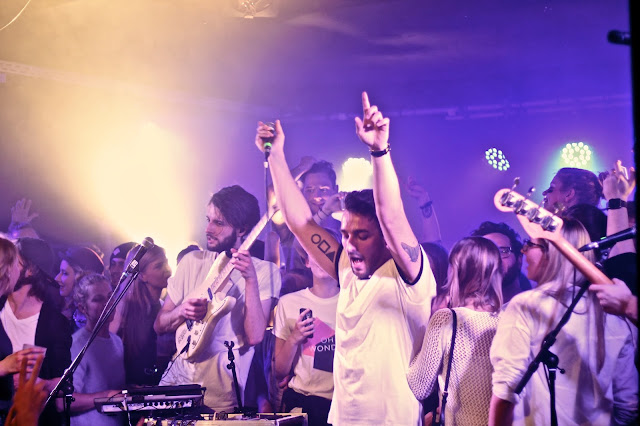 Feedback for “Hey Kid” on social-media also included negative comments – is that something that hits you hard?
Pierre: People reacting to our music is good – people ignoring it would be bad! Of course comments, especially the negative ones, stick in your mind – making music and videos requires so much effort, but at the same time it's only natural that not everyone's going to like it. Social-media isn't important, as long as people come to the shows and sing along.

Although I Heart Sharks is a British-German mix, your fan-base is mainly German. Is breaking into the UK market more difficult when based in Germany?
Pierre: 100% It's as if the phone-lines only go in one direction: from the UK to Germany, but not vice-versa. The only thing you can do is set yourself apart from other bands in the UK. At first we were really bothered about building a fan base in the UK, but touring is England was always only “ok” - it just isn't the same as in Germany. Our focus with the next album is establishing a fan base in France, Holland and Italy. London will always be on the tour, but it isn't our main focus anymore. We'd love to be big in the UK, but the competition is just massive.
It's great to see the music scene in Germany at the minute with some outstanding German bands around!
But generally we believe that it shouldn't really matter where you're from, what language you speak or your accent sounds like: making good music should be the most important point. 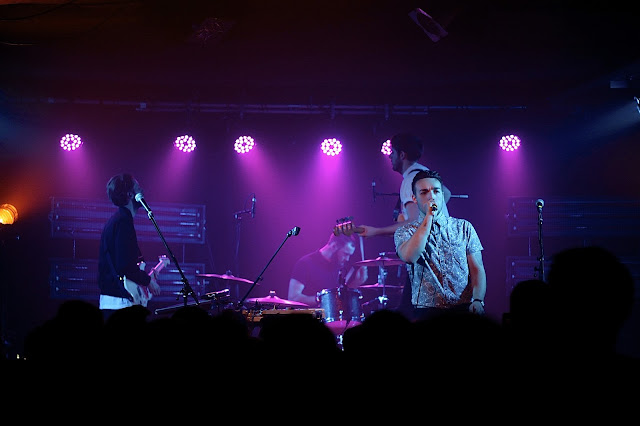 Being based in Berlin sounds like fun! Why did you opt for Berlin rather than London or somewhere else?
Pierre: When we first moved to Berlin it was cheap. We could get a flat there, play music and get drunk. That's what I Heart Sharks was for the first three or four years: playing for a crate of beer and 50€. It was a fantastic time! We can juggle our jobs and music and lead a good life in Berlin.

There are big music scenes outside of Germany as well. Latin America comes to mind...
It's crazy! Mexico City is our second biggest city after Berlin. I think the name “Indie” is the keyword for music fans down there. We've desperately been trying to go on tour there, but we've been told it's too dangerous. Going there on holiday is one thing, but going there as a band and attracting 500 people to a venue, makes you a target for kidnappers. Bands we know who have played there had to be escorted around the country by armed police and military jeeps. It would be interesting, a real experience: we'll keep it in mind for 2017. We really want to go to Latin America soon! It's a beautiful part of the world, the Wild West of the 21st century.