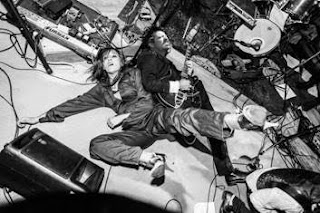 Blood and Glass unveil its new video for Whiskey, the first track off the album Punk Shadows which is set for release in winter 2017 on Simone Records.

The song – produced by Morgan Moore – is sure to ignite the dancefloor  with its Britpop vibe. As the flamboyant Lisa Moore succinctly puts it “Put your mask on, order your whiskey shots and dance like the crazy drunken monster you are”.

The video, directed by visual artist Brigitte Henry, draws us into a world of lost disco, as kitsch and strange as a David Lynch film, in which Morgan and Lisa play ghostlike characters. Just like the song, the clip is both sombre and playful.

Whiskey is available on iTunes and Bandcamp.