Posted by Alexa Wilde on March 25, 2017
"New York Tourists are an alternative band who instantly leave a stamp on your chest". Proving this point with their latest single 'Feels So Good'. Showcasing their care-free and infectious approach to indie rock, it's no wonder the band have been recognised on BBC Introducing and gained support slots with the likes of The Subways, The View, The Sunshine Underground, Buzzcocks. It's also worth mentioning when Status Quo personally invite you to support them, you know you’re doing something right..

Combining the propulsive freneticism of FOALS, with the inherent melody of Friendly Fires, Blackburn-based four-piece New York Tourists manage to deftly balance both energy and aggression, and in doing so have created an idiosyncratic brand of indie rock that’s won them fans in high places. 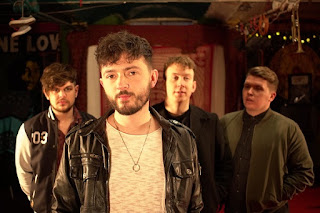 With their debut EP earning them crucial early support slots for the likes of The View and We Are Scientists, and their debut crowd-funded album being unveiled to a 550 strong sell-out crowd in their home-town New York Tourists are a band quite clearly on the up; their latest releases harbouring a bombastic urgency that could only come from a band on the cusp of bigger things.

Recorded with Dave Pemberton (Prodigy, Groove Armada) who caught the band supporting Swansea’s Trampolene and approached them personally, new single ‘Feels So Good’ is no exception. Bringing the band’s inherent and irresistible pop sensibility truly to the fore, it bristles with the energy and excitement of a debut single, while possessing the chemistry and musicality of a band in their prime.

Living far enough from Manchester to reap its benefits, but far enough away as to be impervious to its influence, New York Tourists are in the unique position of being able to operate in their own meticulously crafted bubble, allowing themselves to stand out in a scene seemingly intent on repeating itself.

Watch the video for 'Feels So Good' here:

New York Tourists ‘Feels So Good’ was released through Scruff of the Neck on March 24th.