Posted by Alexa Wilde on April 09, 2017
Drawing from a wealth of influences both modern and otherwise, the Hull-born Leeds-based four-piece The Hubbards are making all the right moves. A smattering of single release earned the band crucial early and continued support from BBC Radio 1 and 6Music, while support slots for the likes of Augustines and The Pigeon Detectives has seen the buzz that surrounds the band grow to an almost deafening level.

With a sound that falls somewhere between the polished pop of bands such as JAWS and The 1975, and the grungey, DIY ethos of their adopted city, it’s clear that The Hubbards have managed to encapsulate a vibe that feels both of the moment, yet ultimately timeless; an aesthetic bolstered by the band’s latest single ‘Just Touch’. 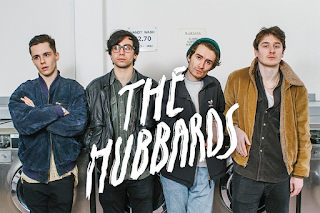 Building on the familiar hazy textures that populated last year’s debut EP Cold Cut, ‘Just Touch’ is a bold release from the band, one which makes good on their early promise, while managing to set themselves apart from their contemporaries thanks to a woozy, Pixies-esque delivery.

The Hubbards are a band very much with their eyes to the future. And with the past couple of years being as good to the band as they have, it’s looking like a bright future indeed. Get listening to this infectious earworm 'Just Touch'.