Three cutting-edge bands are set to play London's 100 Club on Thursday 18th May. Featuring post-rockers First Breath After Coma. The band had a previous incarnation as a high school band, where they played in moldy garages and smoky clubs, trying out their own versions of classics from bands ranging from Joy Division to The Doors and Iggy Pop to the Velvet Underground.

After the release of their debut concept album 'The Misadventures Of Anthony Knivet', 2016 saw the band return with the most recent album 'Drifter' and have toured seven european countries.'Drifter' was also short-listed as one of the best european independent records of 2016 by IMPALA.While many surmise that First Breath After Coma may be one of the great hopes for Portuguese music, those who have seen them live know they are an unmissable talent. The band are set to take their prestigious raw sound in-front of new audiences in the Brighton and London, beginning in May.


Emerging act The Jacques have a new song out 'No Kamikaze', which was released exclusively in France in early February and was immediately playlisted on the nation's biggest radio station Oui F.M
The Jacques continue to evolve into something of their own making - at one turn dark, brooding and unfathomable - the next an exuberant buzz of melody, harsh guitars and scathing words.


While, Surma has already appeared on the most important Portuguese festivals and toured Spain, France and Germany. The young artist plays guitar and bass while her music is an unusual mix of different electronic sounds. She combines these sounds with the help of loop pedals. The result is wonderful music that lies in between jazz and ambient music.

You can expect all of this at 100 Club on Thursday 18th May. 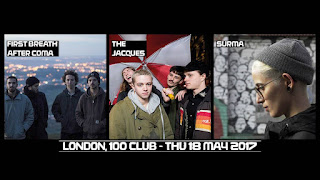