Posted by Fred Bambridge on June 13, 2017
A night dominated by torrential rain sweeping across the Medway sees this four-piece from Kent warming up a medieval vault in their stomping ground of Rochester. They’re playing an invite-only gig to promote the release of their Move Your Feet EP, showcasing five of the best of their swaggering psychedelic bluesy-rock tracks. 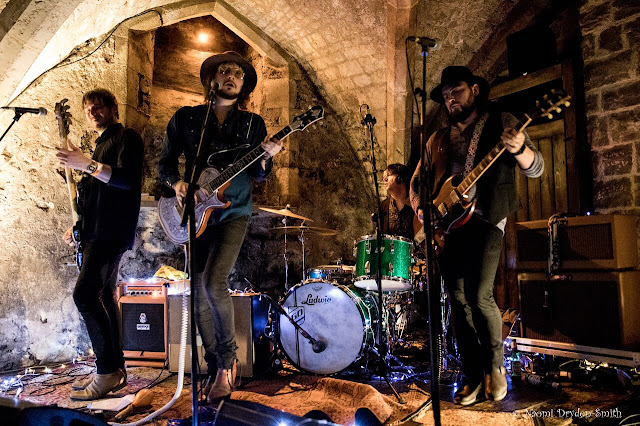 The vault, not far from Rochester Cathedral, is tiny, dingy and atmospheric, albeit increasingly humid, an unusual and unique backdrop to this band smashing out their guitar-driven blues – they look incongruous and yet striking, like four 60s time travellers arrived randomly in a crypt. They are on great form and the songs come loud and fast, filling the space with their Black Crowes-Led Zep-type riffs. 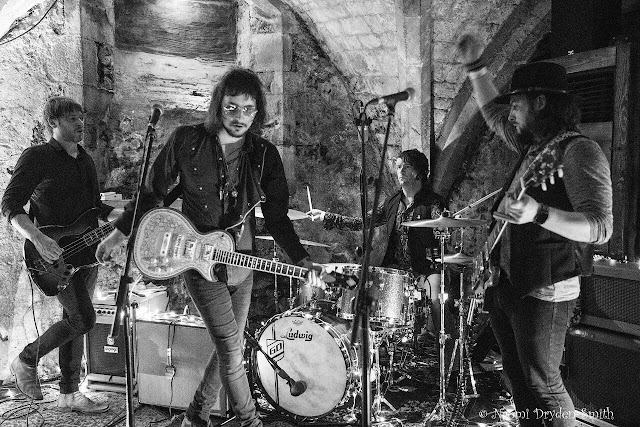 The band starts to notice bits of wall dust falling on them and it gets incredibly hot, to the point that singer Ally Marinelli has to ditch his rather wonderful peacock feather-adorned cape – a tragedy which sparks some serious questions – however it’s not until the final couple of songs that someone realises the aircon, cleverly hidden in an unassuming wooden cabinet that looks nothing like an aircon unit (and actually more like a time-travel capsule), hasn’t been switched on. And could have been. All along. Still, the sweat and noise only heightens the experience – there is humour and intimacy, and a feeling of being in the presence of undoubted genuine talent.

If you like Black Crowes, Small Faces, Primal Scream psychedelia spliced with a dollop of old school blues, then this band is well worth a listen.