Posted by Chris Graham on November 03, 2017
Alana Henderson is a cellist and singer-songwriter you need to get acquainted to. Her self-released Wax and 'Wane EP' drew solid comparisons to Joanna Newsome and Fiona Apple. Shortly thereafter she stepped up to accompany Hozier on cello and supporting vocals. Between 2014-2015 she played over 300 headline shows with Hozier’s band, including notable performances at Glastonbury, Saturday Night Live, Jools Holland and the Grammy’s with Annie Lennox.

Her new single, 'Let This Remain,' is an icy and unforgiving anti-ballad, fusing an electronic undercurrent to her darkly organic indie-folk. A powerful string section surrounds in a magical dark aura and Alana's effervescent vocal gives the intricate backtrack a wonderful folk nostalgia. 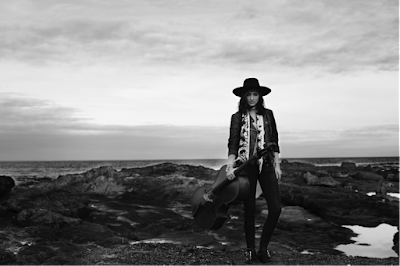 Alana’s mastery of the cello is a highlight of the track, showcasing her dynamic techniques that are looped and overlapped to create a dramatic atmosphere; expertly balancing an arrangement that is both haunting and beautiful.  Written in L.A. near the end of that massive tour, the lyrics reflect on the transient nature of relationships on the road and the emotional detachment that ensues.  When no relationship is expected to last, she jabs, “you could be the one I don’t regret…yet.”