Posted by Chris Graham on January 19, 2018
Throwing heaps of energy, fun and groove-ridden synth basslines, 'Gingerman' arrives with a video which perfectly encapsulates the raw energy and celebration of life. Inspired by J.P. Donleavy’s controversial bestseller, 'Gingerman' is pumped full of 80's electro-punk vibes with an additional modern twist -- the perfect representation of three-man band MARCV5.

MARCV5 comment more on the wild single - "This book was written far before the beat generation movement and we really thought we had to make a song about it as it’s a real masterpiece. For all of us, this is our favourite single from the album. The song came almost naturally to us. For the video, we just set up a camera in front of our actors, put the music on and let them spontaneously do their thing. Following our director, the casting was just perfect, disciplined and well organised. The 8 actors represent very well the diversity of Brussels." 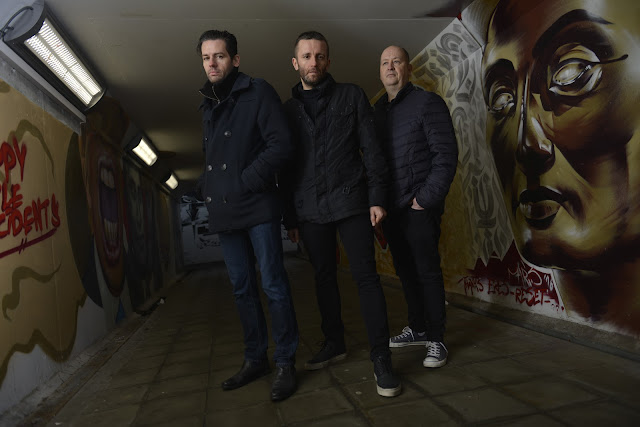 MARCV5 (pronounced MARCUS) are Stephane Matten, and brothers Davy and Geert Standaert. They formed over ten years ago and achieved great success in their home country, Belgium, as well as in various European countries. Their first album 'God Save The King" was released in 2008, followed by several singles along their career. MARCV5 went on the road playing throughout Europe. On more than one occasion, the band performed 3 gigs in less than 48 hours, travelling over 1500 kilometers by tour bus.

Striving with fast tempo tracks that shudder with loud guitars and pulsating synth-hooks, we await for their next second studio album, 'We Can Do More'. It was recorded largely during trips to Brighton, Düsseldorf and their hometown Brussels in the long drawn out days of winter. Capturing the lethargic mood at the time, every song on the album has its own story that intricately links together in some form or another.

"Gingerman" is taken from the album "We Can Do More", to be released March 23rd 2018 via Introduce Records.