Posted by Susan Hansen on March 11, 2018
Alternative rock trio False Heads is focused on a simple objective; they want to continue to develop and perfect their craft. In reality, this is also one of the hardest things to achieve and gain genuine recognition for.

Nevertheless, the band continue to work tirelessly and they view the live music environment as the best and most suitable setting for doing just that. In their ongoing pursuit of being the best they can be at playing live, they are well on their way to achieving that and more with a lot of the hard work paying off.

Building and earning a reputation for giving some of the most immersive, all consuming  and addictive live shows out there, they understand how to wow and paralyse their audiences with what we have come to know as their own original, very unique sound comprising strong elements of Nirvana, matched with a Led Zeppelin meets The Foo Fighters inspired rhythm section. It is not just good, it is above that.

The east London three-piece, fronted by Luke Griffiths on guitar and vocals, Jake Elliott on bass guitar and Barney Nash on drums, has built a particularly loyal and dedicated fan base around cities such as Manchester and London, it continues to increase and the appetite for and interest in the band around key media and music industry circles seems to equal that.

Having just toured the UK with musical soul mates Strange Bones, the launch of their single Retina with a headline show at London's legendary Dingwalls venue was always going to have the word special written over it. It is a big tag but it turns out to be an appropriate one.


The band's choice to focus their set on building up explosive energy, a sensation of complete immersion for devotees and genuine engagement with the crowds, their focus is more than well placed.

In a packed (500 capacity) Dingwalls, there is anticipation, excitement and enough drinks to equal. The band kick off with Whatever You Please, followed by Fall Around and Twenty Nothing. A subtle plan of having no talk or introduction at this point results in a gradual build up electricity and euphoric impatience to reach out, touch and feel something.

The atmosphere is a blend of respect and admiration, genuine willingness to support and nervous energy. Audiences consist of key music industry as well as friends and acquaintances.

Following on with Yellow works as a suitable trigger for delving right into the core of the set, to further increase the volume of excitement and build up toward Retina, and appropriately, so because things become sublimely chaotic and utter mayhem like from then on with moshing, diving and overall insanity.

Now here is a question; how often do you get a crowd to sing a bass line? Probably not that often, but the crowd here knows what it wants and the urge to start chanting the bass line for Retina is strong and so the band respond by playing it sooner than planned. This is subsequently followed on by Slew and Weigh In. Keen to fully join the alt rock celebration party hands on, Luke chooses to dive into the crowds twice during the three songs.

False Heads' Dingwalls show has turned out to be of significance, there is far more to it than purely launching their single. It has been a celebration, an accurate display of just how far they have come as a band and it shows how much more they deserve to gain.

Hopefully, the full extent of their capabilities will continue to gain them recognition in wider circles, if not continents and this will eventually lead to commercial success. A level of success where they do not experience a need to adapt their music much nor compromise their independence and artistic control because that would be a shame; a shame for us as much as them.

Retina is out now on Vallance Records. It is available in various formats including vinyl, CD and  streaming on Spotify 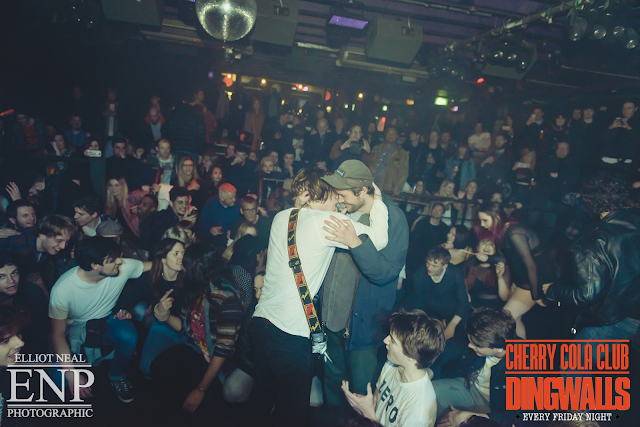