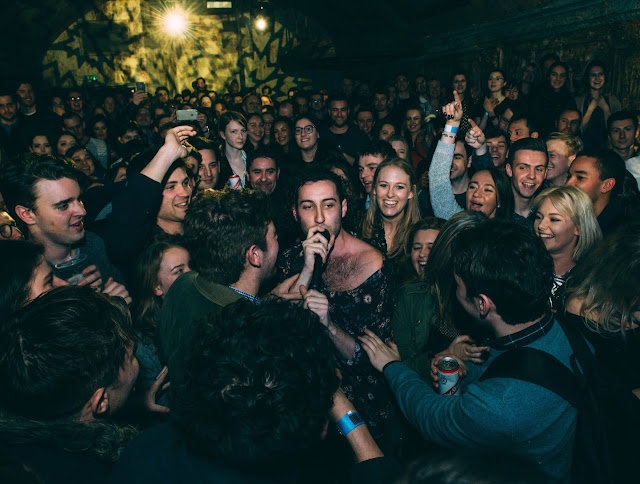 London by way of Leicestershire newcomers Sea Girls do not do things halfheartedly. Rooted in their infectious choruses, the four-piece are making inroads into the UK indie scene. Not only do they enjoy shaking things up a bit (not to mention create tunes for you to shake it to), but they are also genuinely humble and charismatic - which helps create a lively and somewhat altruistic atmosphere.
After catching the lads smash a sell-out show at London's O'Meara, the four-piece let It's All Indie into their mind to ask the real important questions (and some not so serious).

At your sold out show at O'Meara, we heard a few new tunes, which no doubt will be featuring on a new EP or album soon. Can you share any information on the progress of any debut?  Where are you recording currently?
"Yea some of those new tunes will be on our third EP out at the beginning of the summer.   We are writing and recording all the time and are working towards an album maybe end of this year - keeping everyone guessing on that one including us. We have been super lucky with the studios we’ve record in -  from our first EP in one of Rudimental’s with MNEK using the same one and now in this amazing place in central London with all the kit we could want, an amazing engineer Richard and Larry Hibbitt our wicked producer."

You’ve previously described your unattainable goal as finding the perfect middle ground between Sigur Ros and Robbie Williams. But are there any direct influences on your sound?
"We still stand by that statement haha, but more direct influences would be the Killers and Oasis. They are the benchmark for the impact of sound. Then other song writing influences range from Nick Cave to Amy Winehouse. There are great things about both of those artists too - Sigur Ros is one of the best live bands we’ve ever seen and Robbie Williams must have been doing something right."

Describing the London show as one of your favourite yet. Where would you like to headline in 1 years time, 5 years time, and 10 years time?
"1 year Brixton Academy, 5 years Madison Square Gardens, 10 years anywhere that will have us."

We know you guys come from all parts of the country, but where exactly did you all meet? What were your initial thoughts of each other?
"Rory moved up to Leicestershire from Kent and joined us at school and we did music together there. Eventually we all moved to London for Uni and music and formed Sea Girls."

Where did the name Sea Girls originate from?
"We thought it was a lyric in a Nick Cave song that sounded otherworldly. Turns out the lyric is actually ‘city girls’ but we mistook it for Sea Girls and it stuck with us."

‘Heavenly War’ had had a lot recent airtime, even with Annie Mac spinning the record a few times. How did you get involved with BBC Introducing? How are you finding the growing attention?
"Radio 1 are really good champions for new music, we heard about BBC introducing from listening to Radio 1 and their festival stages and that kind of thing. Anyone can upload a track and there is a chance they will play it. It’s been super great the reaction to Heavenly War and so far looks like people are into it, it was always a big moment playing it on tour."

Talking to some of the audience after your recent show in London, a strong positive pointed out is your likability as people and a band, and your connection to the audience. But if you could choose one thing that irritates you at a gig, what would it be? (I personally am not a fan of ‘lensers’ - people who film the whole show rather than be in the moment).
"We would agree with you on filming a whole show, that would really make you arm tired too. I guess one thing that bugs us is loud talking during quiet songs. I remember I couldn’t hear a word of 'Eyes Off You' last time I saw Bombay Bicycle Club."

Sea Girls are pleased to share details of a new single, their second of 2018. The band are also pleased to announce a new nine date UK tour for this October, including their biggest show to date at London’s Scala on 18th October. Buy tickets here.


Henry Camamile on Eat Me Whole – “It’s a story about the moment at a party when it’s just about to kick off over someone being rude and one guy thinking he’s the man, but in reality they’re just killing the vibe.  It was written the same day we recorded it, so it has that exciting and impulsive energy of a brand new jam, so we thought let’s do something in the moment to reflect the story of the song and see what happens. The music and the lyrics all came together and we love how it sounds.”