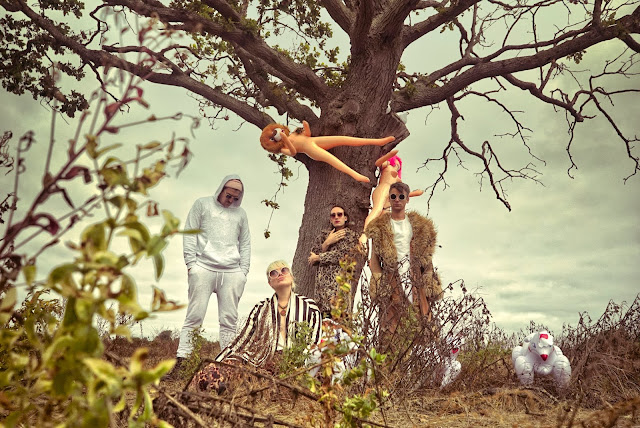 Hailing from the weird and wonderful Brighton, art-pop act LibraLibra channel every ounce of that weirdness and wonder from their creative and culturally diverse city into their fascinatingly unique musical vision. Even that doesn't scratch the surface of their bold and trendless output.

Recent release Skin & Bone sounds like if The Gossip swapped their indie twangs for overdriven guitars and stadium drums and centered them around an electronic backbone, with a bizarrely tongue-in-cheek visual dramatisation of modern life and the toxicity of modern news.

We had to catch up with them to understand the influences that set them on this remarkably lurid path...

Beth Cannon
The Eurythmics – Catchy euphoric pop had me dancing in my diapers. Annie Lennox shines brightly in my eyes.
Tears For Fears – I used to raid my mum and dads CD collection when I was little and spend hours escaping in my bedroom making up super intense musical dramas – I made some epic dances to various Tears for Fears tunes.
Madonna – I was obsessed with Madonna growing up – I begged my mum to get me the Ray of Light album – this album probably pissed my parents off so much cos I would blare it over and over from my bedroom again spend hours dancing.
Pink Floyd – When I turned 14 my mum gave me the Meddle album with Echoes on and I remember just putting it on, lying on my bed and just getting consumed by the whole thing, I felt high before I even knew what being high was – it definitely was prominent in changing my whole perception of music, and opened my mind into a whole new world of music – from then on I became obsessed with finding new music and would spend hours in record shops.
Radiohead – They have simply got me through some really tough times. I based the whole of one my of GCSE drama piece’s from songs from the Hail to the Thief album – I have just always been drawn to them and the language that they speak.


Guy Jones
David Bowie – His technical skill as a songwriter alone is inspirational. Coupled with his continual exploration of sounds, styles, production and the way he plays/changes his image is otherworldly. One of the first artists that taught me to embrace my weirdness and he's an occultist so full marks.
Girl Band – Unconventional and always pushing the boundaries. Their music is awful and I love it dearly. Girl Band feels like the product of and soundtrack to our anxious and cognitively dissonant society.
Christine and The Queens – A brilliant pop writer, dancer, and performer. They're simply an unfiltered expression. Sometimes I want to dance and feel like a rainbow princess and she helps me achieve this.
Bo Ningen – One of the most hypnotic live bands I've ever seen. They are channeling some real magick when they perform. Sexy androgynous witchy freaks.
IDLES – They are doing something seriously important and beautiful right now. When I need the strength to be able to wear a dress and stroll through town I blast them in my ears and remember to love myself. Also another transcendent live experience.

Joe Caple
The Knife - Karen Drejer’s voice is one of my favourites and the production and use of percussion really inspires me
Dan Deacon - his mastery of layering thick walls of drums is awesome. His live shows are also one of the best experiences ever.
Oneohtrix Point Never - Garden of Delete is a bonkers album. His music is completely unpredictable. A genius.
Arca - His production on his and Björk’s records are something to behold. Also, another amazing artist to catch live.
SOPHIE - when Blipp first dropped it blew me away and with each record, her music keeps getting better and better. Such an incredible producer.