The Snuts are right at the forefront of exciting young indie bands currently on the music scene. Signed to Parlophone and currently on a headline tour of the UK and Ireland before they join Lewis Capaldi for his UK tour dates The Snuts spoke to It’s All Indie ahead of their sold-out Southampton show at The Joiners.

You played Birmingham last night, how was that?

It was really good.  With the last run of gigs we did it wasn’t as evident that people were coming to see us but on this run nearly every room’s been full, sold-out every single gig, even tonight has sold out.

How does that feel?

It’s quite surreal especially in England. We always try for that in Scotland and it’s kinda taken a while to travel down South but now it’s just like it’s genuinely felt like we’ve been in a room in Scotland every night this tour, it’s quite refreshing.

I first saw you on the BBC Introducing Stage at Reading Fest 18.

Oh no! That was the worst show ever for us! We had so many technical issues, our mixes went to the wrong people none us could hear what we were playing, it was a bit of a car crash.

How did you get from there to here now? It feels like it’s been building and building?

It’s gained momentum all year, we’ve done a lot of festivals over the summer and gained fans and it’s got us to this moment and a headline tour where everything is settling in.  It’s shown us that hard work has laid the foundations over the last year or two and it’s really started to pay off. That’s always been the plan. The next thing that we do has got to be building on what we’ve done previously. Everything’s got to be a progression. We don’t like to be treading water for too long we want to make sure we’re challenging ourselves and make sure that us, last year, would have been impressed this time round.

Do you have a plan?

There’s always a plan it’s just that we don’t always know what it is!

I saw the footage at TRNSMT and that looked amazing.

Yeah it was. 16,000 people and it was the first time we’d played in Scotland this year so it was like a big homecoming gig for us. It really meant a lot to give so much of ourselves on stage to people who were giving us so much back. Even coming down to England we’ve had people coming along who saw us at TRNSMT so it’s obviously a widespread festival and doing the ground work there has really paid off.

This is your first time here in Southampton at The Joiners. It’s an iconic venue and most bands that make it big have come through Joiners at some time in their careers.

And now they’ve got The Snuts! 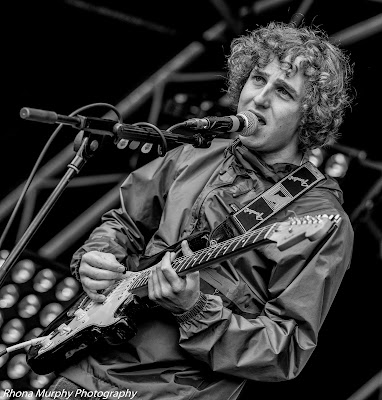 The new single ‘Maybe California’ came out a few days ago how’s it gone down at the live shows?

It’s gone down really well, it’s different to the tunes we’ve done before and that’s what we want to do to show every side of the coin and show what we can do. It’s kinda feel good and happy and we’ve never really done that before so it’s good and refreshing. It’s really great fun to play live as well, people seem to be really digging it.

So which song is your favourite to play?

‘All Your Friends’ cos it’s bass heavy and we also love ‘Summertime’ because it’s like the most epic song we’ve ever written.

And which song gets the crowd going at the moment?

They love everything, we’ve started putting in acoustic songs just to slow it down because we can’t keep up with them. They just smash cans off their heads and throw each other about but everybody’s different. We get people shouting for an acoustic demo from 7 years ago. None of us can even know how to play it, how do they even know that song!
‘All Your Friends’ is a crowd favourite, ‘Matador’ is a good one. The thing about the songs that we play live is that they’re all tailor made for live gigs.  We’ve got a catalogue of songs that we’d never think to play in front of people because they’re so much of a different direction to what people are used to hearing from us. I think that’s probably going to be a good thing for the album as well and that’s kinda why we’re trying to take the releases in a different direction so it’s not such a drastic change when it’s not all hundred miles an hour indie bangers.

Do you have a date for the album?

No official date yet but next year, hopefully. We’ve got a few more singles out yet. We’ll be releasing music regardless of any album date.

Do you have a favourite venue?

To play or attend? To attend would be Glasgow’s Barrowlands, it’s the best live music venue in the world.

You’re supporting the Lewis Capaldi shows later in the year. He’s from the same area as you of course.

We’ve known him for years. We played with him first at Tuts, but most of our gigs were played in Bathgate, there are only 5 venues to play and we bumped into him all the time. It’s good to share a stage with him. He’s obviously the best at what he does and we’re the best at what we do.

And you get to play these massive stages as well. Do you change your show at all for different stage sizes?

Festivals we do sometimes depending on what we’ve just released but this tour it’s the same set every time.  We’re really conscious that every time someone comes to see us the show’s got to be the same in quality and venues like this, where you can get intimate, you can get a few more emotional songs that you couldn’t get away with at a festival or first thing in the afternoon. We want to make sure that every time someone comes to see us they come away with the same opinion. 100 cap venue or the biggest place we’ve ever played. Venues like this are really in your face, like people can grab the mic. It’s really good. It can be hard to be further away from the crowd because you feel disconnected and other times you’re glad you’re not so close.

Thanks to the lads for taking the time to chat

Words and photographs by Rhona Murphy