Posted by Chris Graham on February 28, 2020
There’s no getting around the fact that Northeast Party House are a party band.

The Melbourne six-piece took their name from a parent-free, weeks-long bash held at a friend’s place in Year 12, and in the two albums released since, they’ve created music that at once celebrates that hedonistic lifestyle and contributes to it. Their highly danceable, yet musically complex tunes have been embraced by thousands of fans in Australia and around the world.

Out today, their new album, SHELF LIFE, mixed by Drummer Malcolm Besley at once returns to this blueprint and dramatically expands it. Sure, they’re still making party music, but with SHELF LIFE, Northeast Party House have also made their most naked and personal album to date and the one that the band is most proud of. 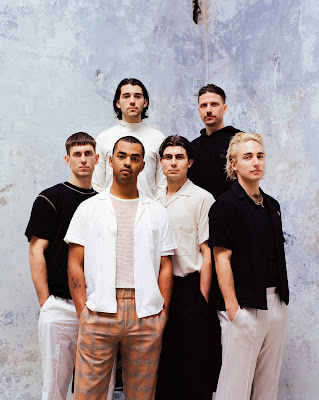 “The album is exactly what we set out to achieve,” says Mitch Ansell, guitarist and songwriter. Having a clear vision of what that was - an album that leant into their party vibe and created huge dance moments at their notoriously fun live shows - meant that the band was intent on taking their time to get it right. “We wanted to get better at songwriting along the way, which will always naturally make the whole process take a bit longer,” Ansell says. “But it feels worth it. Definitely.”

The album’s title track and centrepiece was inspired by the band’s marathon bender at Berlin’s infamous Berghain nightclub, as told through the eyes of lead singer and songwriter Zachary Hamilton-Reeves.

‘Dominos’ is another large, loud club track that came together one loose night while on a coastal songwriting trip. Short, punchy words chosen for their sheer impact, were the starting points for this cheeky banger with an unapologetic, singular focus: fun.

As always, love and relationships feature strongly on the album, with added reflection and introspection this time around. Ansell’s ‘Magnify’ is a full-hearted anthem that captures the delicious anxiety of a blossoming romance while Hamilton-Reeves deals with the end of a relationship in tracks such as ‘Tear In A Club,’ American Diamond’ and ‘St Valentine’.

If the first half of the record represents the come-up of a big night out, ‘Tear In A Club’ might mark the start of the pensive morning after. It’s a gorgeous, clear-eyed ballad in which Hamilton-Reeves contends with his shortcomings as a partner. In ‘American Diamond’, inspired by the name shop owners gave to the cubic zirconias they spruiked while he was on holiday in Sri Lanka, Hamilton laments people’s tendency towards a similar, flashy shallowness. ‘St. Valentine’ compares a relationship’s demise to a car crash Hamilton-Reeves was in and feeling utterly helpless as you watch a situation spin out of control.

SHELF LIFE also sees the band work with an external producer for the first time -- Kim Moyes of The Presets, a band that Northeast Party House names as a key influence over the years. To their surprise, Moyes wanted the band to focus on their strengths as a live act. “I really thought we'd be sitting at a computer going through different synth sounds and that it would be a little more tech and sterile but he really wanted to bring the band out of us,” recalls Ansell of their week-long recording session with Moyes at The Grove Studios, in Sydney. After they had done some pre-production and recorded vocals and drums with Moyes, the band’s keyboardist Sean Kenihan and drummer Malcolm Besley took over and finished the remainder of the production.

Trying to write songs collaboratively has never been easy as a six-piece, but on SHELF LIFE there were far fewer squabbles, with all members on the same page about what the band was trying to do and producing tracks that everyone felt excited about.

Your favourite party band is back and as well as being a little bit older and wiser, Northeast Party House are sounding more focused and more fun than ever.