Fortnight In Florida drop hazy new single, "It's What You Give Up"

Posted by Fred Bambridge on March 20, 2020
Fortnight In Florida have recently released their stunning and hazy new single, "It's What You Give Up", which is the latest track to be released from their debut LP, "In-Flight Entertainment". The outfit have been generating a lot of hype over on the streaming platforms with over 58k's worth of streams last year, not bad for an unsigned outfit! 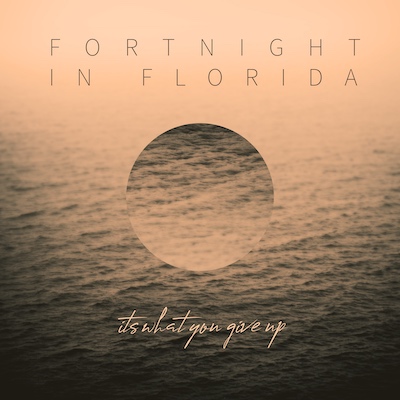 The London based trio have got a lot of buzz surrounding them as of late, with high praise coming in from such outlets as Clash and GigSlutz already with radio plays on BBC 6 Music and Amazing Radio too showing that the band have got tunes that people absolutely love in their back catalogue. And why would you not love their sound, it's the perfect blend between Metronomy, Toro Y Moi and classic 80's electro-pop drum patterns. With sweeping guitars draped with hazy vocals, light synths and with the very addictive pulsating bass combining together perfectly, their sound just really suits our ears as we've played this track on repeat all day.

Be sure to give the track a play, a love and follow the trio on the social medias, it's no wonder they've got so much attention so far, won't be long until lots more people know about them, so get on this hype train now!