A typically unruly barrage of snarling vocals, scuzzy guitars and prophetic lyrics, ‘Project 47’ sees Para Fiction at their bold and uncompromising best. The track’s official video sees the pair performing in an abandoned trainyard, with the bleak, industrial aesthetic proving a perfect match for the music. 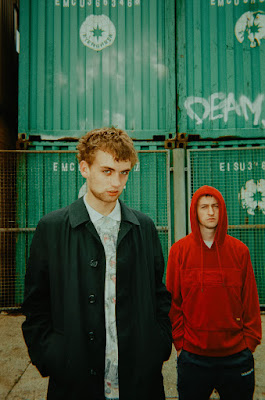 Para Fiction explain: “On our boys computer every time we saved a beat it ended up naming the project with a number ‘47’, in the number that connects the heads to the heart. 47 is an Anti-Human banger, to remind us we are just a blip in the timeline and nature will always outlast us”

Para Fiction closed out 2019 with the release of ‘Episode 2: Epidemic’, their highly anticipated sophomore EP, which combined a diverse range of influences including prog rock and poetic hip-hop, delivered with their raw, DIY spirit.

Drawing comparisons to classic-era Beastie Boys, the DIY duo is made up of rapper James (aka Jambo) and producer Jules (Coding Dude) who both grew up playing in punk rock bands before they first met at a drum and bass night. After self-releasing their debut EP ‘Episode 1: L££CH RIDDEN’ on their label Parasitic last year, the 21-year-olds swiftly won support from BBC Radio 1’s Huw Stephens and Phil Taggart.

Having already shared the stage with the likes of JPEGMafia, Black Josh, Skinnyman and CHLOBOCOP, this year Para Fiction are set to perform a headline show at the Sebright Arms for Abbie McCarthy’s Good Karma Club, and will be playing a huge supporting show for GZA (Wu-Tang-Clan) at the Concord in Brighton on 26th March. Set for a busy summer ahead, the guys have festival dates locked in for Liverpool Sounds City, Live At Leeds and The Great Escape.

Last year, the guys performed at renowned festivals Boom Town and Dreamland Margate over the summer, whilst embarking on a 15-date UK tour at the tail-end of 2019, in support of Kent punk rock outfit Lady Bird. They also linked up with Slaves to perform on their Brighton and sold-out Glasgow and London dates.