Posted by Fred Bambridge on May 01, 2020
Margate based Sisyphes have recently unveiled their sweeping new track "Samsāra", which is their second ever release following on from their debut single "Hispanie". The quartet formed last year and have clearly been hard at work creating some amazing tracks that just fill the atmosphere, the foursome are made up of former La Houle guitarist and songwriter Geoffrey Papin, Clémentine Blue (Tiger Lion), John Davies (Michael A Grammar, Traams) and Jimi Tormey (Gang).

Coming together from multiple bands, the four all brought their own twist to the outfit, with them generally settling upon the softer side of indie-rock, with elements of synthwave and even psychedelic thrown in for good measure. 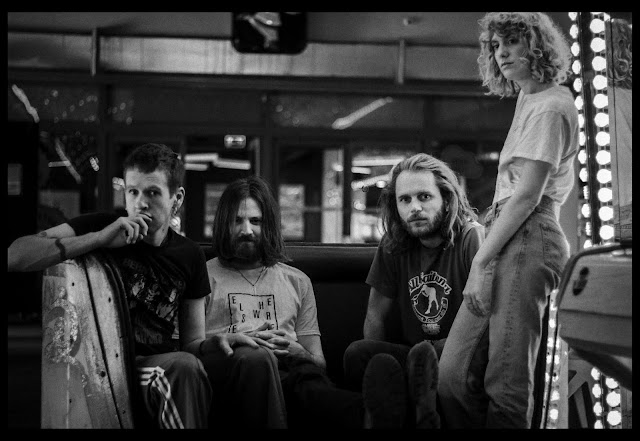 The new cut - "Samsāra" - sounds like a blend of dream-pop with avant-pop, with the band citing their influences to be Stereolab, Broadcast and Julien Gasc - of which you can really hear the former having a big influence on the new single. It's so big basically everywhere in the song with the chorus being the highlight for me, with multiple layers of vocals, sweeping guitars and synths and a sense that this track would be amazing to listen to live. It's a track that you can really lose yourself into.

Taking their cues from the likes of Stereolab, Broadcast and Julien Gasc, they deliver dreamlike pop songs with a touch of French synthwave. Lyrically their literary and philosophical influences shine through – gone are the days when shoegaze lyrics were just a conduit for vocal textures.

"Samsāra" is out now via A Certain Kind Records - and be sure to check them out on their socials and give them a follow on Spotify to stay up to date with their releases.