Posted by Fred Bambridge on June 17, 2012
With a collosal headline slot at Lovebox Festival pencilled in for a few weeks time, The Junction seems tiny tonight for Hot Chip, one of the most popular indie-dance acts in the country. Tonight is sold out not surprisingly, the venue a sweaty mass of bodies by the end of the evening.

Support this time comes from Cambridge's very own cult legend Pete Um. Mill Road's original maverick shuffles onstage with his minidisc player in hand and his sunglasses perched on his head. Um's tracks are usually around the minute mark, his witty and poetic ramblings set to jittery electronics. The set of songs he performs here in J1 are mostly those present on his 'Greatest Hits' album 'Can't Get Started', bar a couple of new tracks. As a friend of Hot Chip and a local man, Pete Um's set of utterly bonkers electronica goes down fairly well, and rightly so. 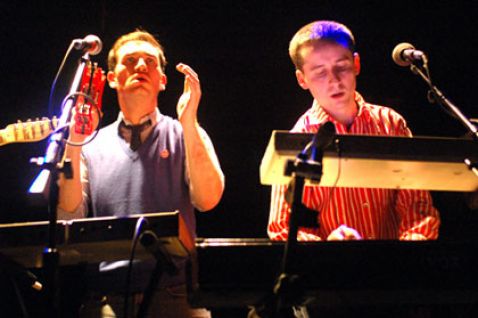 Between the sets comes a 2 Bears DJ Set, made up of some great dance, electronica and hip-hop tracks that are selected well. Though when the music fades and the light fades, anticipation is in the air. Have Hot Chip still got it?

The answer is undoubtedly: yes. The band succeed in playing a selection of tracks from both their new LP 'In Our Heads' and their extensive back catalogue. Classics like 'The Warning''s 'And I Was A Boy From School' blend seamlessly with new tracks like comeback single 'Flutes'. The throng of fans seem to great the new equally with the old, not surprising given the band's consistently fantastic output. 'Over And Over' however buzzes with energy and colour; the crowd do too. In spite of their success, they've lost none of their humble attitude, so perhaps they feel more at home at a venue such as this, though there's no reason why they don't deserve to conquer the arenas.