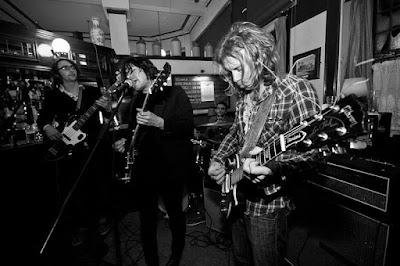 Not too dis-similar to the number of vintage-championing clothes shops that adorn the cobbled streets of Britain's oldest recorded town, Colchester residing blues-fuelled rock quartet, Mollys Daggers have always radiated a passion for rejuvenating the best of the past, whilst harnessing the very talent and closed-mouth confidence needed to subtly propel it through a prism of the present.

And having never diluted the quality of any prior release with such a process,
their celebration of the 'good ol' days of Rock 'n' Roll' is clearly a well oiled and fully-functioning ethos that's been lived by, and rapturously inflicted upon many a commending audience since the band's incarnation back in 2010. And, throughout the glorious, ramshackle entirety of their long-awaited debut album, 'Prima Materia' it's an acquired trait that's unavoidably prominent.

Scheduled for release on vinyl later this Summer and recorded directly to tape in order to create an entirely analogue listening experience, both the LP's recording process and the sultry racket of the finished product itself, echoes, mirrors and harks drastically back to the glory days of era-defining musicians and psychedelically warped, sexual-innuendo riddled album artwork. A time where digitalisation was a mere pipe-dream only accessible in science fiction, and an age where the Snapchat generation that we exist in today would have been envisioned as a frightening dystopian nightmare, capable of bringing the world to it's knees.

But this isn't an album about the politics of social media security, nor does it question whether it's morally correct for David Cameron to harbour the power and technology to legally snoop on our porn-filled internet history - and that's because 'Prima Materia' is a straight-up, Rock 'n' Roll blues record that's yearning to be played in a sleazy, dripping-with-sweat whisky bar, sardined with people unlocked from the shackles of all their usual inhibitions - a longed for by many, form of escapism achieved immediately after dropping the needle.

Emphatic album opener and exuberant live staple, 'Give Up Your Lovin' ruthlessly pulsates in the same vein as early-Kings of Leon, as it's repeated guitar riff intertwines with an occasional handful of descending blues chords, before a bombardment of thumping drums - courtesy of Pat Gavrilovic - invigorates the emphasis of the lead lick (now enhanced by guitarist Richard Smith) and in doing so, coaxes the boisterous bar-brawl of a track out of its cage, like an arm from the locked jaws of a Pitbull.

'Shakin' Like The Leaves On The Trees' quickly follows, inhibiting the same ferocious bark and ridged temperament as its predecessor with a retaliating and primal guitar solo, whilst the storytelling, acoustic-led country ballad of, '44 Stone Jenny' (penned by bass player Ed Sheldon) juxtaposes the onslaught that bookends it, as frontman Dan Wood's drowsy vocals hover effortlessly over a consumer-conjured up image of an elderly, straw-eating hillbilly rocking peacefully back and fourth on a creeking patio in a rural part of Southern America.

The ruckus resumes, however, when the cocksure, balaclava-clad sense of immortality on 'Sweet Mama' pulls up just in time to perfectly soundtrack a bank heist get away film scene as Wood ferociously attacks the songs opening lyric with a menacing snarl - proving instantly that it wouldn't have appeared out of place in Guy Richties, cult classic 'Lock Stock and Two Smoking Barrels' had it have been written 17 years earlier.

The intriguingly named, and my personal album standout track, 'Zin-Uru' opens with a blank canvas, until it is experimentally splashed with colour after colour, as the track's music begins to personify the twists and turns of an unpredictable voyage into the unknown. It bubbles and teases with musical cliff-hangers, almost sexually frustrating anti-climaxes and 'Brothers In Arms' (Dire Straits) influenced slender guitar tones, that eventually - amidst the morphing and transporting lead vocals - slowly build into a fulfilling and monumental orgasm unleashing, crescendoing soundscape of swirling euphoria and phaser-drenched guitars that emulate the unsettling, yet adrenaline spiking sound of a nosediving aeroplane.

The John Lennon meets rhythm and blues stroll of 'So, So Long' banishes any idea that Molly's Daggers might be an all or nothing band - an idea eligible to be contrived through the first half of the record - as its combining exuberance of 'Give Up Your Lovin''s electric guitar with the minimalistic nature of '44 Stone Jenny', adds yet another spoke to the band's ever churning wheel. Down on your luck vocals compliment the old school organ - played by Sheldon - drastically playing homage to the traditional blues love songs of the 50s/60s in the most professional way imaginable.

Following, 'Spoon Of Your Sugar' - a Beady Eye in places, mind-puncturing and mountain-ascending little ditty that first surfaced on the internet a couple of years ago - is the initially slow-burning, yet pace-changing strut of 'Turn To Stone', a number that delightfully merges elements of psychedelia and rock to produce a colossal and experimental soundscape, draped in the same billowing cloud of magic vapour that you'd expect to see pulsating from a funny-cigarette-smoking hippy, trapped in a kaleidoscope.

Interestingly, concluding with the mellow sway of 'Needle and Thread' - a Jimmy Scott inspired number penned again by Sheldon - Mollys Daggers go against the grain once more, in choosing not to conform to what an albums closing track 'should be' - a definition almost of the band itself.

In reality, Prima Materia 'is the primitive and formless base of all matter similar to chaos'.
In the form of this album, however, it's a barn-storming testimonial to the golden years of the guitar - carefully weaved together with tapestries of blues-fuelled rock 'n' roll and convicted with charming attitude.
This Prima Materia isn't 'similar' to chaos, it is chaos, real chaos - and Mollys Daggers have certainly brought it.