Posted by Jason Hare on November 22, 2015
If you live in or even near Huddersfield and finding new bands to get involved with is up your street then you need to keep an eye out for the Radio Hud nights at The Warehouse. Some really good quality new music that will be on the rise in the near future. For free aswell!

Floodhounds of Sheffield were the first proper act of the night. Having made the schoolboy error of placing too many 50p's in the Quiz machine at the time of their set starting, I had to watch the opening track 'Bare Bones' from the sidelines. But knowing this tune was about to drop, my games waited. A belter of an opening which hit me with an instantly nostalgic feel, dare i say almost Oasis kind of sound to it. 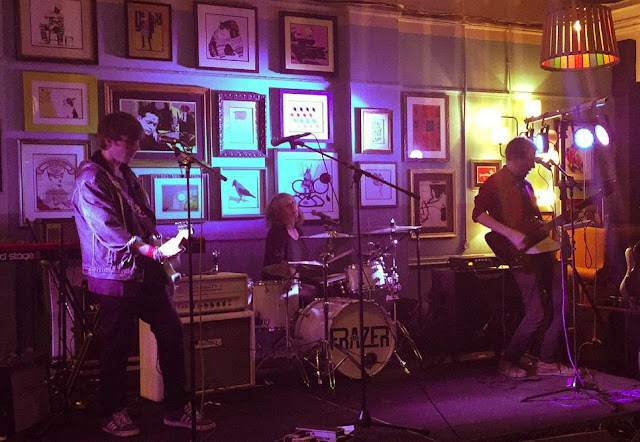 I thought this trio were class, a strict and driving force drummer with a complex and intriguing bassist. Add on top the lead guitarist and vocalist being able to distract your attention with storyline lyrics. I'm sold.

I quite like to listen to the band at the time i'm writing things like this and although it might be 10am on a Sunday morning, their soundcloud page is making me feel like its 10pm on a Friday night.

Head on over to their pages for more.

Moving on, Late Night Legacy. Where do i start? I think i have to start with how much of a contrast i felt there was between the lead singer and the band. Just in terms of effort it felt as though the lead singer was preparing for a title fight and the others were his towel men.

That said musically the rest of the band were spot on. Playing a slightly more heavy version of events for the evening, I think they would have suited more of a Don Broco or We Are The Ocean kind of gig. 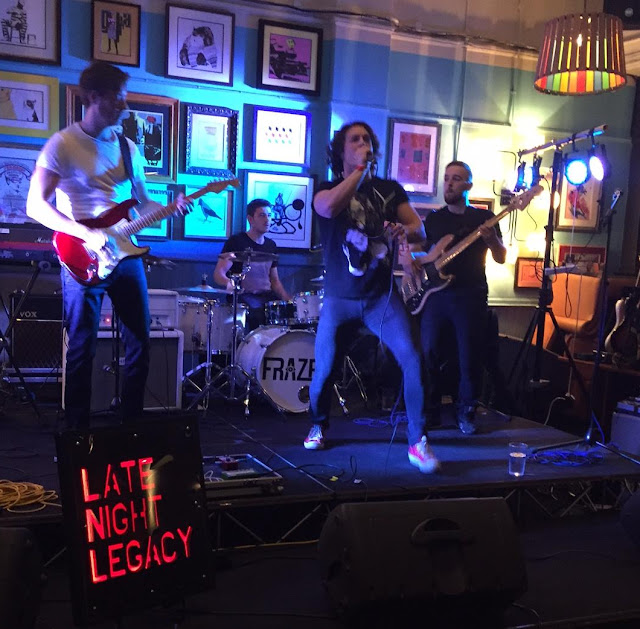 The atmosphere was decent for the gig which i'm putting down to a combo of decent tunes and the lead singer squeezing in some cardio during songs. Leeds should be proud of churning out some really good bands in the last few years and these guys can be added to that list with a little fine tuning.

Not my normal cup of tea but if you want to dig a little deeper, links below.


Headliners for the evening were Frazer who I heard literally nothing about until researching them for this gig.

I'm going to say that this band raised me up, and up, and kept going and then unfortunately disappointed me massively! 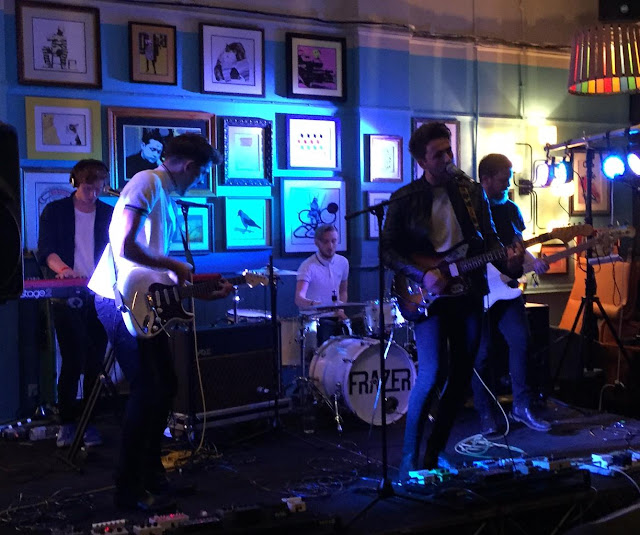 Research - check. Grab my attention, seemed to work well.
Style - check. Look like cool lads that SHOULD be in a band.
Set up - check. Keyboard, drums and bass with a duo of guitars attacking from the front.
Interaction - check. Good laugh with the crowd, got people involved.
First decent tune - check. 'Two Hands'. Brilliant. Exactly what i was expecting to hear.
Talent - check. The lead guitarist is a star in the making no doubt.
Effort - check. Lead singer run off and jumped on a table at one point.

But all that good work let down for me. And here's why...

A direct quote from their soundcloud bio is "FRAZER a 5 piece emerging from Sheffield, have a sound unlike any other". What! I'm sorry but I simply can't agree. I've heard a million and one bands shout "Oh oh oh, yeah yeah yeah". If you want screaming 14 year old girls at your gigs... that's how you get them.

Straight after the gig I googled how many words are in the English Language. Apparently there are 1,025,109.8 (have no idea about the .8 haha) but it can't be that hard to pick some different words that are still easy too sing along too if that's your aim.

During the gig I wrote down that it felt as though musically they had run a marathon but lyrically they had peaked too soon. Mainly because their tune "Two Hands" is lyrically brilliant. Maybe that juxtaposed their more simpler songs for me.

I would still implore you too check them out even if it's too disagree with me.