Posted by Unknown on February 22, 2016
King Gizzard and The Lizard Wizards and YAK graced the Electric Ballroom in Camden last week to perform a one of the wildest gigs I have ever been too. With King Gizzard and The Lizard Wizards headlining, the show was already set to be an intense one, however YAK as support only made the line up more explosive.

I've read numerous reviews about their ridiculous and over the top stage performances and they did not disappoint. YAK not only bring a new breed of dirty grunge rock to the scene but also the most entertaining show I have ever seen live. I lost count at how many time the lead singer, Oli Burslem, threw himself backwards into the audience. It is entirely refreshing to watch a band who aren't precious about their instruments, or bodies for that matter. YAK served perfectly as a crowd warm up and had the entire audience throwing themselves into each other moments into their set. I have the highest hopes for these guys and their future as a band.

King Gizzard and The Lizard Wizards began their set with a very tension heavy rendition on what I thought was music from Star Wars - but it worked and was more interesting and anticipation building than most other bands I see headline shows as big as electric ballroom.

The experimental Melbourne groups opening song, Danger $$$, chimed 70s guitar vibes that took me back in time. Together with their psychedelic - static tv - back drop King Gizzard and The Lizard Wizards set an atmosphere that is completely unique to their invented genre. It couples acid trip rock with modern grunge indie and even laces in some poppy hooks. Their quick changes from melodic, ethereal melodies swaying in and out of tune to dark, overdriven thrash rock kept me reeling. 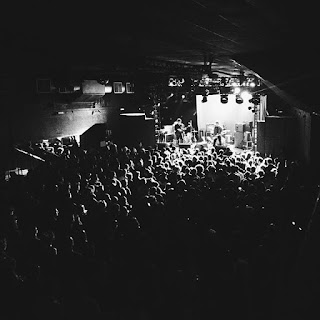 My favourite aspect of their set was when lead singer, Stu Mackenzie, whack out a flute and begin performing the most rock and roll flute part in existence. I honestly never thought I would see a flute be played so gracefully on a swelling psychedelic back drop but I guess there's a first time for everything. It was as though I was watching a drug-fuelled jam session.

The crowd, and myself included, were most excited for Hot Wax and the atmosphere in the room burst into energy as the bass line kicked in. Viciously fuzzed guitars weaved in and out and solidified my primary opinion on King Gizzard and The Lizard Wizards: completely unhinged and utterly fantastic.