Posted by Nicolas Streichenberg on February 19, 2016
Al Pride are collective of Men and a Woman from Switzerland (NOT SWEDEN), who certainly step up the game from their other two albums. "Hallavara" is the 3rd record and "Leaf" is their first single off their highly anticipated album which they recorded in Sweden

The Video is all about dark, all grey, black & white, but if you take an earful of it's music it's rather something you listen on a festival when you're half naked in summer, super drunk and you think about pissing into your bottle, because there is no way out of the crowd. 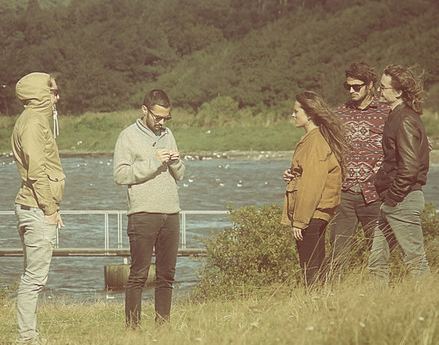 A more like bouncy-new-soul sounding drumkit is always working with nice crunchy, well draw barred-fit Hammond. My favourite parts are definitely ... The keys. The best song so far by Al Pride. Not sure if it was an overdubbing or not but the keys are monstrous. Not sure why they kept and hid major talents there... Big up and I hope this record is rather a key-record than something else. Have fun watching the video, i leaf it right here: