Posted by Jason Hare on March 07, 2016
Floodhounds did me the honour of coming to do a 'The Hare and the Hound Session' the other night (check out some of their recordings from the evening HERE) but we also bumbled through some questions in some sort of vague interview, interrupted by beers and music. Here's what they had to say:

Jase Hare: Thanks for coming to do a session in the Hare and the hound, I'm really looking forward to this one.

Jack Flynn: Yeah thanks for having us! The pictures of the bar you sent us look great so we're very intrigued.

Jase Hare: It's tiny but it has charm, and once you guys are set up there would only be room for 6 people anyway haha

Rhys Owen: Well we played a gig the other day to only 7 people anyway so don't worry about that.

Lauren Greaves: small crowd probably suits us more! but this should be fun right.

JH: hopefully haha so I see you've been gigging a lot recently to be fair, have they gone well other than the small crowds?

RO: couple of them were really good and we've recently done a BBC Introducing session for Sheffield so that was tick in our box. 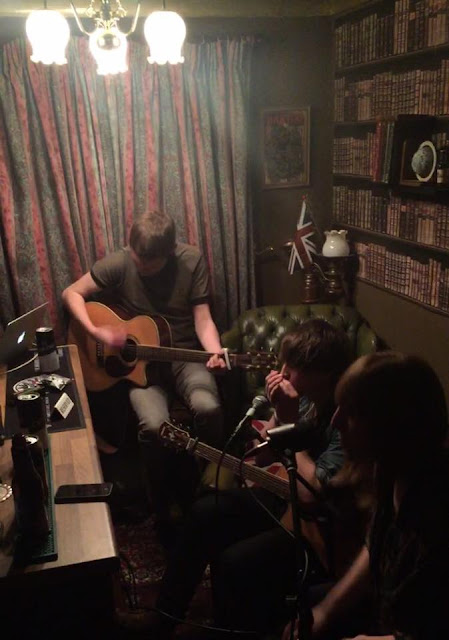 LG: We had a few weird things after that though where some people thought we were going to be the UK's Eurovision entry this year!

JH: What?! hahaha how come?

LG: Really surreal to have your family ring you up and ask about Eurovision all of a sudden haha.

JH: Personally I can see 'Bare Bones' being a great entry, I mean if Lordi can do it right? haha. So you guys have "normal" jobs outside of the band as well but I suppose the dream is get to a point where this is your day job?

RO: Of course we'd love to get paid a lot more, who wouldn't? But we just need to keep putting in the hard work, playing gigs and growing our reputation.

JF: We were going to play a few of our own tunes here and maybe a cover of something to be all round good session.

JH: sounds awesome to me, shall we crack on.


JH: That was brilliant, genuinely enjoyed that guys. Do you like the bar?

RO: Yeah it's brilliant! Real character for a small house pub. Thanks for the hospitality. What's the Hound's name?

RO: Like Vivienne Westwood, did the fashion industry not work out and diversified into naming small niche pubs hahaha

RO: Sounds like a song title 'The decline of the textile industry' hahaha

JH: If your next release is called that I'll laugh my head off. Talking of releases, do you have anything exciting in the pipeline?

JF: Yeah certainly, we'll be able to share more info soon but very exciting stuff around the corner and some more sessions...

LG: ...but this was a good fun little session and hope that sounded OK for you guys!

Joe Brumby: Sounded great to me! I'll edit and sort the videos out in the coming days for you so yeah thank you coming down.

JF: We'll sort you guys out some t-shirts and if there's ever another free slot to do this again we'd certainly check out schedule.

Thanks to Floodhounds for coming down and Joe Brumby for recording/editing/drinking that evening.