Posted by Fred Bambridge on June 30, 2016
It's a fact that musicians always land on their feet while performing at Glastonbury, and this year was no different. A few acts caught my eye and fr varying reasons too, all of the acts mentioned below simply blew me away! 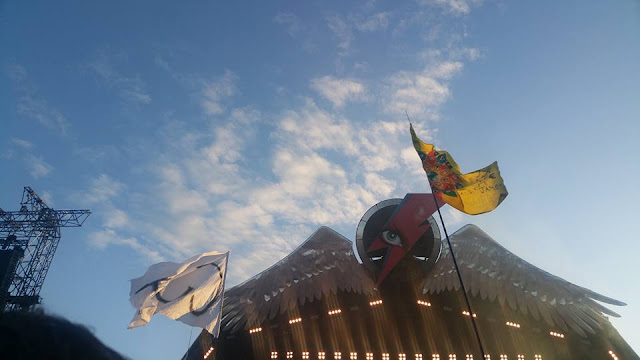 Foals last year were contacted before The Libertines to perform in the spot made vacant due to Florence + The Machine filling in for Foo Fighters, however Yannis told the media afterwards that they felt that they were not ready, but this year they turned Glasto on it's head. Their show on The Pyramid Stage was by far one of the best performances I've seen on that stage in the past 4 years, and even despite some sound issues on the last song they still left the crowd wanting more. They are easily potential headliners, just give them a few more years.

From playing at 200 capacity venues to playing on The Other Stage in the matter of a year is always a good sight to see. They've also come off the back of supporting The Stone Roses so they're now use to performing in front of huge crowds and easily captivated the early lunch-time festival goers braving the rain and wind. Even though they were on early you will expect to see them climb up the billing in the next few years.

Every year since I've been going - 2013 - The 1975 have been performing, starting off in the small Williams Green tent in 2013 all the way to The Pyramid Stage in 2015 they've come a long way too, and it's well documented how hard the band work. Even though their slot this year was at the (slightly) smaller Other Stage, their late evening slot created a big buzz around it, especially when Maty reached out the crowd and gave his two pence regarding the EU referendum vote. They're always crowd pleasers and maybe this is why they can grow and grow, and who knows, maybe even headline a stage one day!

For me this was a wild card on my line-up, as I haven't even seen this act before live, and didn't know if it was a DJ set or what! His music is very Deep-House and I was expecting to see a Jamie XX sort of arrangement, however he performed as a live band with two mates backing him up on drums/samples and keys. With the dreadful rain outside he easily drew a lot of people into the tent, but as soon as he kicked off his set everyone was in agreement that this was a great find, and rightly so. I found myself walking away from the set thinking that SG Lewis is one of the brightest prospects in music right about now, let alone within his genre!

The London based act have been working hard on releasing some stonking tracks over the past 12 months, and this year saw them perform a few times over the weekend, most notably at the WOW! stage on Thursday midnight (or Friday morning, whatever). They followed Mura Masa who brought in a huge crowd, and easily kept them entertained as an energetic set was expected from the moment they took to the stage. With some political lyrics effectively winning the crowd over and a foray into the crowd from their frontman everyone was buzzing off their tits after this. The band are still an unknown quantity and if you want to hear more head down to one of their shows, you won't be disappointed!