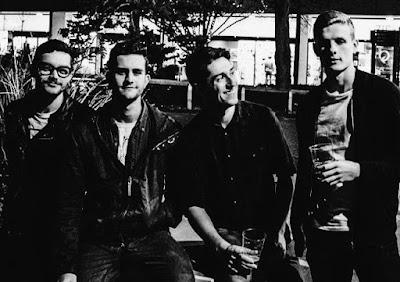 The Norwich Indie-Rock band Odder Seas might have only just released their first two singles on SoundCloud last year, but having already supported Clean Cut Kid & Fickle Friends, we sat down with Odder Seas to talk about what's next for the band.

Oli: It is a great venue to play; we played there earlier this year. so it's nice to be asked back to showcase our music to a new crowd.

The material you have out so far is great. ‘Take It Back’ sounds like a love child from The Wombats and Two Door Cinema Club with a unique twist and ‘What Comes Tomorrow’ is a quaint and upbeat indie track. Was there always a certain style of music you had in mind? Or did it naturally just come about over time when practicing together?

Tim: We weren’t chasing a particular sound, but we were intrigued to hear how our wide range of musical influences would impact our sound as a band. We love guitar bands in general, as well as loads of other stuff and I'd like to think our E.P. and further future releases will reflect that.

The band formed last year in 2015, can you tell me how you all met? Why did you choose the title Odder Seas for the band?

Farv: We met in our first year of uni, but the band as it is now, has only been together for around a year, so we’re still a young band.

Chidgey: To be honest we had to pick a name for our first show at Camden Barfly back in September last year; after a few drinks during rehearsals one night we landed on Odder Seas for whatever reason, the name stuck and here we are!

Tim: Really cool, it was our first time really supporting nationally recognised bands so that was awesome. We're big fans of both bands and they're the sort of guys we take inspiration from as relatively new bands.

What do you all do outside of music?

Oli: We’re all currently studying at UEA in Norwich, and a few of us actually made the effort to join sports teams so we play a bit of football and rugby. Tim recently lost a couple of teeth in the process so anyone that's down on Sunday... keep an eye out!

Tim: But of course the band is a big focus for us so it always takes priority.

Who are Odder Seas’ main influences?

Tim: We all share common ground in our taste in indie/ alternative rock bands like Kings of Leon, Chili Peppers, the 1975, Foals etc.. But we're into so much stuff, so some of the inspiration for songs comes from places you wouldn’t expect. I’m into shoegaze so I like replicating that sound in some of my guitar lines, whilst Chidgey is into some heavier stuff which I think you’ll hear in his basslines.

Farv: Our local music scene here in Norwich, and significant support from the BBC introducing Norfolk team definitely has had a big impact on our direction as a band, and we look regularly to other BBC introducing artists for inspiration.

Odder Sea’s first ever EP is expected this autumn, do you have an official date? And are ‘Take It Back’ & ‘What Comes Tomorrow’ going to be appearing on the EP or have you gone in a different direction for the debut EP? ( e.g. Libertines totally disregarded ‘don’t look back into the sun’. keeping it as a single rather than putting it on their debut EP)

Farv: There hasn’t been a drastic departure from the first two releases, but the overall Odder Seas vibe is definitely heavier than what most of our listeners might expect.

Tim: Yeah I think people are a bit surprised when they see us live for the first time, but I think the EP will them give a better picture of what we're about.

Finally, What’s next for Odder Seas?

Oli: We’ve been changing up our material and overall setlist constantly, trying to formulate the sound we feel is representative of the band as a whole. Due to commitments outside of the band we've unfortunately had to push back the initial release of our EP, but expect to hear a full 4 song EP within the next couple of months!