Posted by Alexa Wilde on March 23, 2017
Bare Traps have made a refreshing return in 2017 from releasing their new double single ‘All In You’ that features the B-side ‘Waiting Outside’. Forward-thinking as subject to their sound, the two tracks have opposite personalities with a well-recognised indie-pop vigour in the lead single yet the other more synthetic and slow. 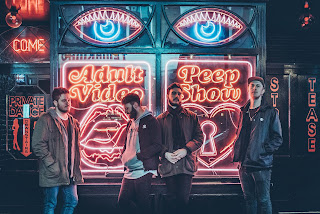 Central Dalston offered a great atmosphere at The Victoria last Friday and it was clear that the support was clearly alive and with Bare Traps. The large venue room ended packed out just before the arrival of their set, which was great to be a part of. Older singles that featured the two previous members of the band sounded full and had the room moving with the fun noodling guitar lines. Witnessing the two new singles live was great, you could feel the enthusiasm and positivity in the band’s playing. Their huge summery indie rock sound only flourished when this was put to the stage, which was the best part of the set. These guys are killing it right now and in case you missed them you’re in luck as they’re playing a bunch of shows near to the end of the month and beyond!

11th April - Under The Bridge, Chelsea (For Mind, the Mental-health charity)

Listen to 'All in You' here: