Posted by Alexa Wilde on April 21, 2017
Beach Riot are a fuzzy four-piece consisting of Rory O'Connor (guitar/vocals), Cami Menditeguy (guitar/vocals), Jimmi Suza (bass/vocals) and Jonny Ross (drums). Based in Brighton and London the band bonded over a mutal love for Demob Happy and a desire to make music that "people can lose their shit to".

The quartet's DIY sound is all about hooky noise fests attending to a current underground scene that is brimming with fuzzy grunge. Taking mutual influences from the likes of Queens of the Stone Age, Nirvana, Cable, Sleater-Kinney and Pavement, Beach Riot are ready to bring live music back to how it should be - moshy, sing-along affairs of tracks motivated to making you move. 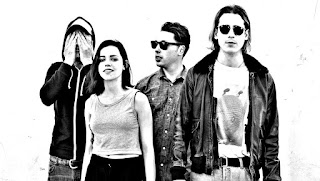 "The song is more about channeling a certain feeling and vibe then saying something in particular, like a mid argument expesssion of emotion" - Rory O'Connor

New track 'Mr Fixer' does what the band does best, providing your ears with four minutes of intense gritty rock. Opening with grungy charging riffs and crashing drums, this one is gutsy and fuelled with bouncy energy. Keep this band on your radar!