Posted by Benjamin Brown on July 09, 2017
After a three year break we returned to Germany's Southside Festival this year to see some of the biggest international and German bands take to the stage at the 60,000 people strong event.
One of the biggest challenges faced by the organisers leading up to the festival was maintaining a high level of security and ensuring the safety of all music fans after a wave of terror attacks all over Europe and the targeting of live music events such as the bombing of the Manchester Arena earlier this year. A visibly expanded police presence complemented the toughest bag-checks we've ever experienced at a music festival. Rather than scare off or frustrate festival-goers, the measures in place were greeted with understanding and respect – everything was ensured to make sure that Southside-goers would have a fantastic time as they had done in previous years.


With the first concerts kicking off on Friday, the three-day celebration of live music began. With larger-than-life headliners such as Linkin Park, Green Day and German rapper Casper performing alongside some of our favourite artists including Alt-J, Future Islands and Lorde we enjoyed a fantastic weekend of singing, dancing and running from stage to stage.

Our Friday kicked off with Austrian band “Bilderbuch”. Having been on the German-language music radar for some years now the Vienna-based group have developed their live performances into a unique mix of self-irony (maybe?) and entertainment reaching far beyond their music. Watching the stage-presence of their singer Maurice Ernst feels like seeing a reincarnated, hybrid version of Falco and Freddie Mercury – with each one bringing their best qualities to the stage. Complemented by two background gospel singers giving the group thunerous choruses (and, fulfilling every cliché, even rapping on one track) Bilderbuch have perfected the art of turning a concert into something resembling theatre, comedy and fantastic music. Singer Maurice ended their set by making a promise to the crowd: Bilderbuch wouldn't return to Southside in the future until they were headlining the festival – something probably going to happen sooner rather than later. Not bad, Austria, not bad.

Next up was Leeds' (and possibly England's soon-to-be) most famous trio, “Alt-J”. Their post-sunset performance on the Blue Stage proved to us once again that this is a band that can undoubtedly be considered one of the best in the world. The ability of playing their highly detailed and intricate music to perfection means they cannot interact with the crowd as other artists do. And while that is often frustrating, with “Alt-J” it simply doesn't matter. Their music is all-engulfing and manages to capture every person in front of the stage. The reactions that new songs such as “In Cold Blood” received prove to show: This is a band going from strength to strength – if “Bilderbuch” really return to the southern German festival as headliners, chances are they'll find their name at the top of the bill next to “Alt-J's”.


The English trio's set provided a fitting finish to our Indie-Friday and left us excited for the second day of action. 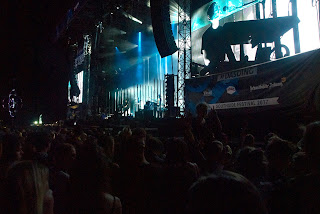 We started our Saturday well rested with Norwegian group “Kakkmaddfakka”. Having already seen them play at a festival in the pouring rain, I can now say: Their good-mood music is far more suited to the blazing sunshine! Trying our best to avoid heatstroke we enjoyed the band joking and dancing (terribly!) throughout their entire set.

Our first piece of evening entertainment was provided by the incredible “OK KID”. The German band's unique, thoughtful atmosphere was perfectly suited to their indoor slot, enabling them to not only perform in a dark ambient but also turn the Red Stage into a Sauna. 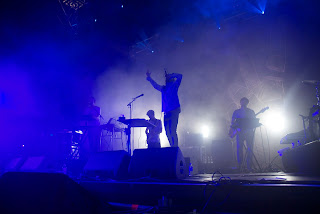 My highlight of the festival was Frittenbude's late night slot. I've written a lot about this band on this blog and yet, they amaze me every time. Their energy levels, rave-like atmosphere and awareness of important political topics make for a perfect set in far-from-perfect times. Taking to the indoor “Red Stage” the Audiolith-signed band proved once again why they are so widely regarded amongst fans of German-language rave-indie-punk (if that exists).

Partying through the night with Frittenbude's lyrics stuck in our heads we explored the festival's party tent, late night DJ sets and spontaneous campsite raves. Falling asleep to the sound of action and awaking to the same is a good sign of people having a good time – so going to Southern Germany for Southside is going to provide any visitor with more than just live sets and day-time activities. Those feeling particularly daring can also choose to bungee jump from a crane on the festival site – something many fans decide to do naked.


After Saturday's long day of action we were looking forward to Sunday's performances. And we weren't disappointed. Nothing But Thieves' set showcased the delay between the UK and German music scene. Whilst the band had performed to a huge crowd at Glastonbury that weekend, they only managed to attract a small number of fans to their Southside set. And yet (or obviously) these few were filled with such high levels of enthusiasm and energy that they made up for the lack of numbers.

From an English band to a New Zealand solo artist: It was time for Lorde to take to the stage. Having just released one of the most applauded pop albums of the year she managed to attract an enormous crowd (of which many were actually older than her) all eager to see her perform. Fans clearly weren't only there for her new album, though, with her “older” songs receiving a roaring reception from the crowd, eager to hear everything Lorde had to offer. Her incredible vocals, fantastic beats and somewhat weird (the “we like it kind of weird”) stage-presence saw all her expectations fulfilled and proved to be the perfect audiovisual soundtrack to enjoy the afternoon sunshine to.

The final set we got to enjoy made sure our Southside 2017 experience ended in the best possible manner. “Future Islands'” incredible musical ability and passionate vocals led to a performance we can only describe as one of our highlights of this already highlight-packed weekend. 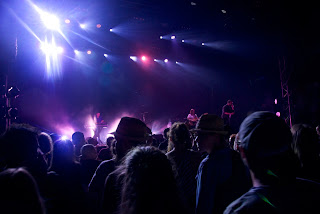 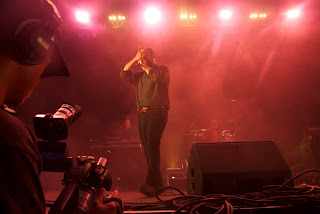 As expected we had a great time at this year's Southside Festival. Great bands from all over the world (of which I reviewed some of my highlights) and vibrant after-partys all combined in a crazy 72-hour escape from reality. I'm sure we'll return in 2018 – and so should you! Ticket sales have already begun: www.southside.de/en/tickets/tickets-2018 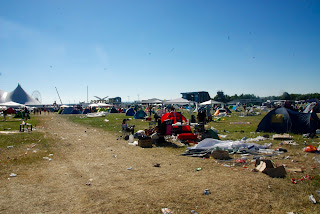 All photos and text by Benjamin Brown