Posted by Fred Bambridge on August 07, 2017
IAI caught up with one of the most exciting bands of 2017 The Shimmer Band before their set at Truck Festival. Since playing the BBC Introducing Stage at Reading Festival The Shimmer Band has been busy winning legions of new fans across the UK. Tom Newman and Tom Smith (Schmidt) chatted about what they’re up to and how influential This Feeling has been in getting new bands on stages!


To make things easier, we're going to use their surnames for the transcript here! 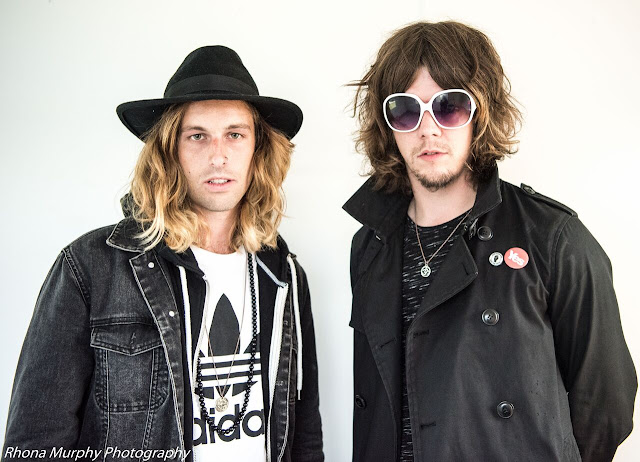 I first saw you on the Introducing Stage at Reading Festival last year and it seems to have gone completely insane for you since then!


So how did you get involved with BBC Introducing?


(Smith) We uploaded our first single ‘Shoot Me’ to the local station Introducing the West and we got a few plays. Then our second single ‘Freedom’…
(N) Well it was after ‘Shoot Me’ our first single got uploaded and they played it locally a little bit and then they got us to play a BBC 6 festival in Bristol and Steve Lamacq heard us. And then we released our second single ‘Freedom’ and Lamacq played it loads and from that we got the Maida Vale session…
(S) That was amazing!
(N) Yeah it was really cool!


Was that scary or exciting?


(S) It was exciting but it was a weird one, we hadn’t like done a session before had we?
(N) No we hadn’t done anything like that


So, I find that I come backstage and I meet people like you guys and I’ve seen you on stage and for a while I’m a bit overwhelmed, is it the same with you when you see more established bands or bigger bands?


(N) Yeah, kind of, it definitely used to be but it feels a bit more normal now, we’ve met loads of interesting people, our heroes and you do get used to it after a while.


(N) It’s amazing, obviously Mikey Jonns is the man. It’s good to have someone just being positive about British guitar music.
(S) That’s what it takes, that’s what it needs and it’s only a good thing.


And you’re doing a This feeling tour later this year?


(S) Yeah it’s a pretty big one, we’re doing like half a month’s worth of touring in October
(N) There’s a few bands on the bill…


Bang Bang Romeo is one…


(N) And BlackWaters and Blinders and the venues are pretty good. We’re doing Electric Ballroom in London.
(S) That’s the biggest London show.


I’ll catch you down at the Brighton date


So the Electric Ballroom that should be exciting?


(S) Yeah, Mikey Jonns is a fucking hero, I really think he is. It’s what people want, what people need.


(N) Yeah it’s great and he’s done it at Leeds Festival and TRNSMT. It’s exactly the same set-up and it works really well. All these bands on there are really good. Not to put like a downer on the industry but if it was 15 years ago maybe all these bands would be charting and blowing up and doing really well. But things have changed now, it’s a little bit more bottle-necked. It needs thing like this, This Feeling and people like Mikey Jonns championing..


Who has the vision?


(N) Yeah it’s just about having a positive attitude about things. People get very negative about music and bands. It’s just music at the end of the day.


You get a lot of big bands like Kasabian were controversial a few months ago saying there are no good guitar bands out there. But then they have an album to sell…


(N) They’re deliberately looking for a reaction, they know it’ll go on the top of NME but there’s plenty of good music out there. Maybe labels are more interested in solo acts at the moment because they’re less of a gamble and it’s probably cheaper than putting a band on the road. I feel there’s loads of fucking good bands and we’re having a good time!


(N) Yeah we don’t even know who that was, someone sent us a message saying “we’re going to Glastonbury and we’ve got a big Shimmer Band flag” and we were like fucking amazing, thank you very much. And then it kept popping up on TV and we’re getting messages every 2 minutes saying “I’ve just seen your flag”. It was great! And we DJ’d on the Saturday night and played loads good tunes and everyone was dancing having good fun. It was great!


My final question for you then, there’s a lot of talk about lack of female bands on the circuit. There are bands like Berries coming through playing This Feeling and Northern Exposure, what’s your view on that.


(N) I think there are some great female bands. You’ve obviously got bands like Black Honey, Bang Bang Romeo, Yonaka, who are really fucking good, a really tight band and Savages are a couple of years down the line now but a great female band and Anteros. I’ve heard nothing but good things about them. They’re there. The bands are there they just need to be given a push and opportunities and whatever!

Thanks to The Shimmer Band. Catch them of the This Feeling Alive tour in the autumn playing alongside Bang Bang Romeo, Blinders and BlackWaters.