Posted by Unknown on November 05, 2017
18 year old indie sensation Declan McKenna has had a non-stop 2017, having formed a part of The Sound of 2017 polls (BBC Sound of 2017 long list, #2 in our Itʼs All Indie shortlist), embarking on numerous sold out UK and European tours, releasing his highly anticipated début album ʻWhat Do You Think About The Carʼ (#11 UK Chart position) and performing an utterly incredible sell-out headline show at KOKO on Friday night, there is no doubt that these are very exciting times for the young musician. Having followed his journey since winning Glastonburyʼs Emerging Talent Competition in 2015, we have seen how Declan has developed into an entirely unique artist and become an inspiring indie personality for his audience through his insightful lyrics and interesting character. 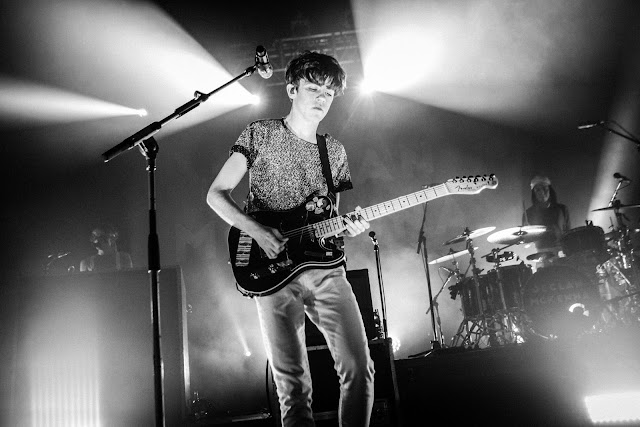 On Friday night, we attended Declanʼs sold out hometown show at KOKO in Camden. The atmosphere outside before doors opened was brimming with excitement, queues of teenagers spiraled around the venue, all waiting with clear anticipation of sprinting inside to try and obtain a spot as close to the front as possible. Glitter was a common theme with most audience members, following Declanʼs lead in wearing Bowie-esque sparkles. The prestigious venue became packed in a matter of minutes, with hundreds of animated adolescents waiting for the moment when their idol would grace the stage for his biggest London headline show yet. The positive energy within the space became somewhat infectious, with everyone singing along to the pre-show playlist consisting of catchy pop hits (Rick Astley, MGMT, A-HA, The Human League to name but a few!) Audience chants of ʻOh Declan McKennaʼ (to the tune of Oh Jeremy Corbyn/White Stripes) circulated, with the entire crowd chanting five minutes before Declan was due to grace the stage. Madonnaʼs ʻLike A Prayerʼ hyped the audience, the lights dimmed and raucous screams enveloped the space, everyone was exceptionally excited for what was to be one of the best gigs of the year. 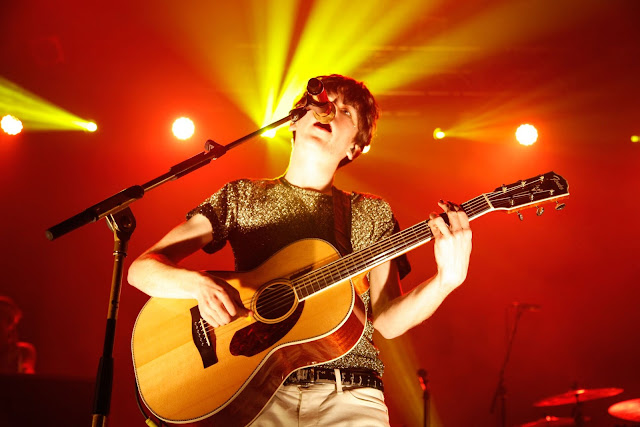 Declan and his band came up on-stage confidently and with poise, all dressed in similar outfits consisting of gold and white. Everyone took to their instruments, and Declan stood on a high platform ready for the incredible set list that was to be performed. Commencing with catchy single ‘The Kids Don’t Wanna Come Home’, the crowd became animated as the stage lit up and Declan’s positive energy was extremely evident. Jumping down from the high platform, Delcan interacted with the crowd and established his rightful position on the KOKO stage. The memorable, bouncy chorus encouraged mosh pits galore, as well as non-stop jumping and loud, articulate singing from every audience member. The dedication of Declan’s fan-base became apparent, every lyric meant something to every adolescent teen in the audience, and the enthusiasm of every fan towards the music was touching. Following on from this, Declan played the more acoustic number ‘Make Me Your Queen’ which consisted of clear sentiment in his flawless vocal as well as interaction with the audience when approaching the front row barrier. Declan’s deep and thought-provoking lyrics are undoubtedly brimming with emotion, and this was clear when playing some of his earlier tunes ‘Basic’ and ‘Bethlehem’, the clarity and slickness in the band’s performance was inspiring and provided the foundation to what was a faultless setlist from Declan and his band. The intricately written tune ‘Mind’ swiftly followed, establishing a more waltz-like tempo and showcasing Declan’s advanced musicianship skills through more complex instrumental arrangements. Again, the audience were hooked and the entire crowd were singing aloud with such dynamicity that KOKO felt like a special place that night. 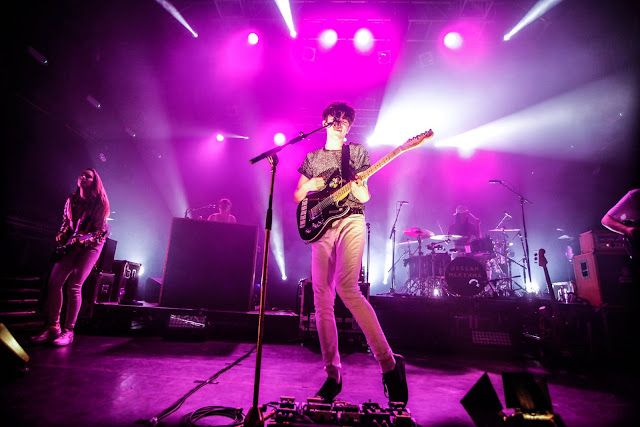 More recent single ‘Humongous’ received cheers of excitement and elation. Initially commencing as a quiet, acoustic number, Declan held the crowd’s attention with every note and meaningful word. As soon as the chorus came along, people got on people’s shoulders, Declan interacted with the crowd and every teenager could feel the powerful track. The instrumental bridge at the end of the tune reflected the incredible talents of each band member. Lead guitarist Isabel Torres graced the stage with poise, playing catchy riffs and intricate melodies, supported effortlessly by the foundation of the flawless driving rhythm section provided by the incredible Gabi King on drums, bassist Nathan Cox and keys player Will Bishop. The more fast paced track ‘Isombard’ resembled Declan’s memorable Jools Holland performance last year, consisting of the young musician running around the stage, hyping up the audience and making the atmosphere electric. A short pause between songs allowed Declan to express how grateful he was to be playing KOKO, explaining that he had attended his first ever gig at that venue. Swiftly leading the crowd into an a capella audience singalong to the intro of ‘Why Do You Feel So Down?’, Declan secured himself the position of an indie idol, it felt as if the room would follow his every move. The upbeat tune enlivened smiles all around, a feeling of warmth and cheerfulness enveloped the vicinity. 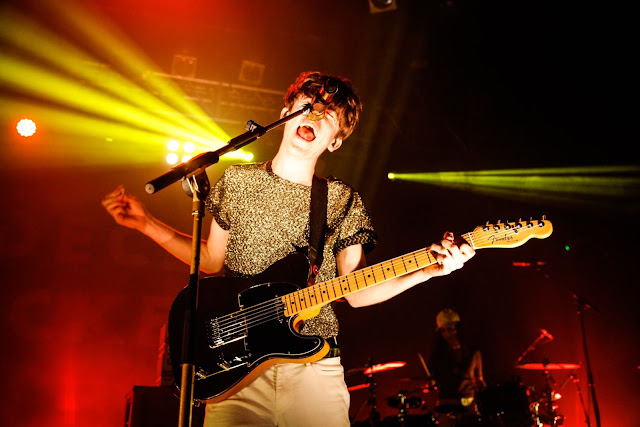 The end of the set was approaching, the tuneful ‘I Am Everyone Else’ reinforced the positive energy in the room, consisting of harmonies galore and dynamic vocals that were brimming with emotion. Poignant and significant track ‘Paracetamol’ showcased Declan’s mature songwriting skills, tackling the media’s portrayal of LGBT communities. Again, his thought-provoking lyrics in a live atmosphere have an extra powerful layer to them, the crowd singing in unison with the singer was very moving and shows why Declan is one of the key songwriters of this generation. Lastly, Declan closed his set with hit single ‘Brazil’, the euphoria and excitement in the room was evident, Declan crowd-surfed, as did other audience members - a sense of unity was apparent. Confetti cannons exploded and KOKO was a golden paradise. The band left the stage to cheers which engulfed the room of ‘Oh Declan McKenna’, which promptly lead to an encore of ‘Listen To Your Friends’. Declan’s spoken word section was inspiring whilst on the platform and speaking to the crowd, the audience were listening to and echoing every word, it was a magical moment. 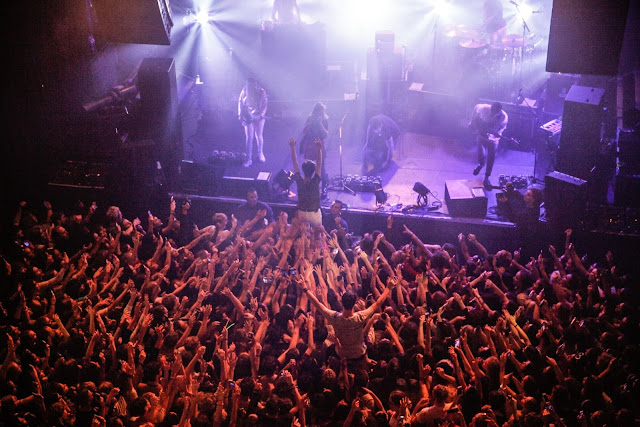 Declan McKenna certainly conquered KOKO - a sold out show, a committed fan-base and a setlist consisting of incredible songs strengthened his rightful position as one of the ‘Sounds of 2017’. This feels like it is only the beginning of a very exciting journey for the young musician, and with a show already scheduled at The Forum Kentish Town next year, big things are ahead without a doubt. Tickets are on sale this week - make sure you don’t miss out as it is a show not to be missed!

All photos exclusively by Lauren McDermott.