Posted by Nicolas Streichenberg on January 11, 2018
The danish rockband GO GO BERLIN is returning in 2018 to several cities as they've been promising after an intense Q and A on facebook a couple hours ago. So I was wondering what the band is up to and how they've been. A word with Christian Vium,  frontman of GGB! 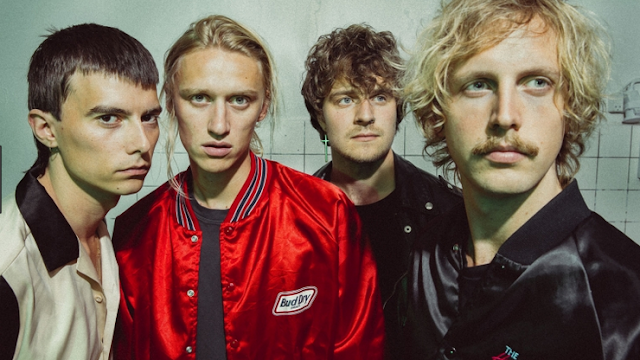 1. Hello Christian! It's been a while since you've played in Switzerland, specifically in Zürich ZH. Can you name three things you look forward too doing in this city... party maybe as your schedule says you're having one day-off here...

"Yeah man.. Way too long. It's been weird not being "the touring band", but we've really really worked hard on the coming album. We needed this time off! I'm not even playing you, but Zurich is really one of our favorite cities in the world. Walking by that Zürichsee is something. SO fucking beautiful. Party like a snow leopard by the night!!! We're definitely going to have a party in Zurich once again."

2. You introduced me to Unknown Mortal Orchestra a while ago. You wanna hand in some of your latest "influences, earworms" which maybe coloured your new music, you've been promising hitting out this year?

"Oh i did? Epic shit!! You gotta love UMO. Hm... that's a tuff question. I think i recommended you The Blaze too right? (He did actually! Give it a go: goo.gl/DQ3Pto) Or was that the other way around? Anyway, they're SO great too. A different style though. But some of the music we have our eyes on at the moment is Hamjam, Parcels, MOSSS, Alex Cameron (listen to Stranger's Kiss) Go Go Berlin will still be Go Go Berlin, but our music has definitely grown more alternative, while the new songs are the best songs we've ever written."

3. Where do you think true love can be found?

"Yes. But true love can't be found where it doesn't exist. Nor can it be hidden where it does... Haha. True shit! ...put that in a song right?!"

4. Through what changes (mentally, gear-technically maybe physically? #hair) have you guys been going through since the last EL-Concert?

"Yes. People change. And so does haircuts. Like I was saying before. We've definitely been going through some changes. I think we've become better at making music for our own time than ever."

5. You will play Rote Fabrik on Saturday 20th. A venue you've never been. Do you check out venues you never visited before going on tour?

"No, never. It doesn't really matter when or where we play.. as long as it's dark. We prefer a dark setting. It's easier to give in to the music when it's dark - for the band and for the audiens. It's best for everybody. I actually like when you have no idea of what you walk into."


You can listen to an alternative version of "Maybe Tomorrow" here. No new music yet, it's coming this year though, watch out for these guys!