Posted by Susan Hansen on January 27, 2018
There is more than plain good reason to assume 2018 is going to be Pretty Vicious' biggest and best year so far.

Just under two weeks ago, the band announced details of their forthcoming UK tour. It kicks off in Manchester, at Soup Kitchen, on the 7th March and finishes at London's Borderline on March 15th.

Recent recording sessions at Monnow Valley Studio in Rockfield, Wales with producer Dan Austin continue to be of a highly productive nature and the band members are very happy with current working relationships.

The multifaceted British producer worked with the likes of Six By Seven, Kid Wave, Starsailor, The Coral and James Lavelle and others before beginning work with Pretty Vicious.

When It's All Indie covered the Methyr Tydfil four-piece back in November 2017 it became clear just how much the band members love working in the studio and how essential the producer relationship is to them. Recently, the band's bassist Jarvis Morgan spoke about how Austin 'totally gets us in the studio.'

Promising and exciting times are imminent. The prospect of hopefully getting to see and hear an eagerly-awaited release from the band later this year is exciting.

These Four Walls, released toward the end of last year, is a haunting and intense piece of guitar music which may well be suggestive of what is to come. The new material is going to be of a high quality, to say the least.

The NME has been backing the band from the beginning and the awards show this evening is a sign of continued support for the band.

Pretty Vicious' show is the first in a series of ten with a remaining eight to go. A range of bands are featured including the likes of Franz Ferdinand, Yonaka, Superfood and Public Access T.V. The Awards Ceremony itself is held on the 14th February at London's Brixton Academy.

If tonight's show is anything to go by it could be a hint as to what fans can expect from the noisy Welsh rockers' forthcoming UK tour.

Predictably, there is a lot of intense energy, their characteristic  direct, heavy sound and catchy guitar riffs are suitably accompanied by energetic, fast-paced drum fills and vibrant bass lines.

The 11 songs on the setlist includes some brand-new material, it highlights what is so good about Pretty Vicious and creates an insatiable craving for more live shows and further releases.

Opening with Are You Ready For Me sets the vibe, builds a sense of anticipation and three songs into the set, it is time to showcase what a belter of a tune Move is.
The crowds are responding well to the high energy levels and pace. Less than halfway into the set they start to jump, and rather suitably, the jumping soon transforms into a desirable, intense mosh pit. Everyone there knows most of the lyrics in detail and there is a strong sense of togetherness. The likelihood of far more people joining a Pretty Vicious 'choir' in the future is probably high.

As the band work their way through their set, the heat intensifies. Down My Way and No One Understands stimulate a lot of hand clapping. The decision to phase the set with Blister, Skin, National Plastics and Cave Song is appropriate, it satisfies everyone and increases the intensity of the heavy but supportive sing along, again their fans really know the lyrics. Every fan in the room is fully engaged and one hundred percent part of the intimate gig experience.

From the vast majority of young guitar bands who are on the scene right now, there is a need and desire for Pretty Vicious to make it big and hopefully it is an event due to unfold right in front of us very soon. 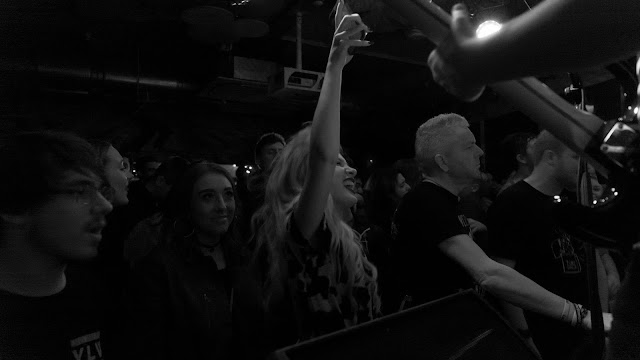 The sooner the better and this year would be ideal, these things can take time and we have been spotting a few glimpses of it. The odds are definitely there with them, working in their favour and the timing seems right.

So in answer to a question they have been asking of late; yes we are more than 'ready for them' and their music.


Pretty Vicious UK Tour 2018 - tickets are on sale now so  why not go and grab a couple immediately by visiting: Pretty Vicious  or  Ents 24


To read more about the world of Pretty Vicious then click right here:  Interview Feature