Posted by Chris Graham on March 23, 2018
Hailing from Germany, singer-songwriter NINA has been going from strength to stength from creating a unique style of synthwave, heavily inspired by icons of 80's - her electrifying sound has seen her release two EP’s, to now where the London-based artist has released her debut album, ‘Sleepwalking’.

We took some time out to get to know the singer-songwriter and see why her new album 'Sleepwalking' is so demanding.

How did you find your passion for music?

Organically I fell in love with music from a very young age. My parents and I used to drive up to Denmark every year for holidays and I remember listening to the radio and singing along to my favourite songs. Music for me was an escape to a place where I could dream away and just be myself.

You've been working with Richard X, who's helped on some of the production duties on the album. How was it working with him?

I love working with Rich. He’s worked with so many artists I look up to and it’s a lot of fun writing and recording with him. He really dives in to the recording process and he’s a perfectionist like me. He has an extensive collection of analogue synths, which I found super impressive.

There are also production credits for Oscillian, did you work on tracks with him as well as Richard X? What was this process for these particular tracks?

Oscillian produced 7 out of 11 tracks on the album. He’s extremely talented and we totally ride the same wave when it comes to music. He’s based in Sweden though, which made the process a little bit longer, but we still made it happen with a lot of Skype calls, WhatsApp, and a couple of trips back and forth.

If you could sum up your 80's influences what would they be?

It would be anything from Synthpop, New Wave and Italo Disco to movies and TV shows like Back To The Future, Knight Rider, Miami Vice, Depeche Mode, Queen, OMD, Dire Straits - just to name a few. 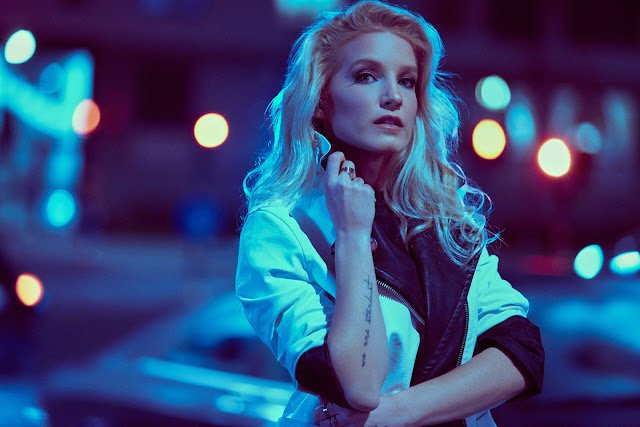 How long has ‘Sleepwalking’ been in the works?

3 years. My next album won’t take that long, promise!

What track on the album means the most to you?

‘Diamonds In The Rough’. It’s a dreamy ballad and about the first time you fall in love with someone. This song was played at my mum’s wedding in Las Vegas, as she walked down the aisle, so every time I listen to it, it takes me back to that day.

Is there a common lyrical theme behind the album and how is this presented in the songs?

I talk about personal experiences but also narratives; every track has a different theme. A broken heart (Beyond Memory), the struggle of being a single mum in the 80’s (80’s Girl), a runaway road trip (Purple Sun), being bullied in high school (One Of Us), feeling your partner’s pain and helping them through hard times (Your Truth).

There has been a revival in 80's music in the last few years in pop music, why do you think that is?

I think a lot started with the movie ‘Drive’. The aesthetics and soundtrack of the movie were a big inspiration for a lot of Synthwave artists and it felt like it’s ok to make retro inspired music again without being cheesy. It’s a timeless era, and a lot of us were kids then, so it brings back that nostalgia.

How would you describe your live show to someone who'd never experienced this?

You’ll experience a lot of dynamics and you will feel that you’re part of an 80s movie soundtrack, but with a current twist. We’ll take you on a journey.

What plans for the rest of the year do you have?

I’m very excited about my first vinyl release. The album will be pressed on pink 12” vinyl in May. I’m also going to play a few UK live shows, and I’m already working on my second album and collaborating with some amazing artists.