Posted by Benjamin Brown on June 12, 2018
Taking place in Belfast, Coventry, Perth and Swansea the “Biggest Weekend” saw bands take to the stage across the whole UK in late May. Being billed as a one-off event, BBC Music and BBC 6 Music joined forces to present the best of the best in a year without Glastonbury.
Four days, four cities and more than 175,000 tickets – or as Bob Shennan, Director of BBC Radio and Music, stated: “The Biggest Weekend is going to be a once-in-a-lifetime festival for everyone […], with the widest selection of musical genres, the BBC has ever put on.” 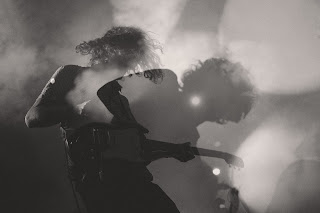 We were on track in Belfast where the BBC chose the historical site of the Titanic Slipaway. It was truly magical being able to listen to good music with River Lagan, Cave Hill and the famous yellow cranes in the backdrop.
Speaking of yellow – Belfast presented itself in the most glorious sunshine with summery temperatures.
The only downside to the location was the slightly constricted place which saw the two stages very close together. Therefore artists performing on the “6 Music Recommends Stage”, the smaller of the two, sometimes got drowned by the sound of the main stage.
The smaller stage could hold its own with talent on show, though.
One of the best examples is “Jordan Rakei”. He underlines his soulful hip-hop sounds with jazz-driven elements. No wonder his haunting bass had us swaying along.

“Public Service Broadcasting” brought some interesting topics to the Belfast stage. They paid tribute to the significance of the location by introducing a new song addressing the tragedy of the Titanic in 1912. As their name might suggest they are known for sampling old radio recordings, archive footage and propaganda material talking about topics like the first ascent of the Everest and the rise of the coal mining industry.
With lyrics not quite as deep but instead a deeply charming voice we were wowed by "Courtney Barnett”.
As the inscription on her drummers base drum asked “Tell me how you really feel?” – we knew our answer: We definitely felt great. A feeling that was boosted when indie-rock prodigy Kim and Kelley Deal (“The Breeders”) joined her on stage for “Nameless Faces”.

Singing along to “Becks” the steadily growing crowd danced into the sunset. Feeling the atmosphere, Beck Hansen saw the need to state that they were “no wedding band”.
Our mood was slightly chastened by the quite long waiting times during the change-overs which took place around the same times on both stages. We did, however, enjoy listening to songs by “MGMT” and “Future Islands” in-between.

Kicking off the second day of the festival with worse weather but therefore even better music we danced along to “Neneh Cherry” and her unbelievably complex hip-hop and R&B influenced sound. Talking about the recent abortion referendum in the Republic of Ireland she dedicated her song “Woman” to all the strong women listening because “consciousness and love is the only way forward right now”.
Continuing with strong females the Swedish sisters from “First Aid Kit” were definitely a crowd favourite.

As were “Franz Ferdinand” – which basically says everything. They proved once again that “Always Ascending” isn’t just the title of their latest album but also their never-ending steep career. Their post-punk indie rock from Glasgow saw the audience jumping along and enjoying the “Biggest Weekend” coming to an end.

Although Shennan had introduced it as a one-off fixture on the festival-circuit we would love to see the “Biggest Weekend” become an annual event. BBC Music and BBC 6 Music just showed again that good music is all you need – definitely a great kickoff into this year's festival season!