Posted by Richard Maver on June 29, 2018
“Ben Howard is one of the most adored and admired artists in the current British musical landscape” explained one punter to another. And I couldn’t agree more. With his latest album ‘Noonday Dream’, following on from critically acclaimed album ‘I Forget Where We Were’, it could be argued he is also a visionary. The progression from “just a coastal boy with a guitar” to now reaching further in his experimental efforts, he astounds his audience time after time. I have seen this first hand - from watching him play in the small Brudenell Social Club in Leeds, blasting tunes off his first ever EP and doing audience requests, to now incorporating a show entirely off a rather abstract album. Controversially, it seems his more recent tours sadly, are not necessarily designed to please or entertain the crowds. For some this is not a bad thing, as they are now to make you reflect and explore deeper than ever before. It makes the sets fairly impressive to some, relatively boring to others.

A few weeks back, I saw Ben Howard’s first out of two consecutive sold out shows at Hammersmith’s Eventim Apollo. Having recently seen both Jessie Ware and Bon Iver in the same venue, there was a lot of history living inside of the walls of this legendary theatre. There was a feeling of great importance. The crowd seemed calm but somewhat restless after his four year break. The night signified an important point in Ben’s career – a tour and album which has established him as one of Britain’s most intelligent artists.
The show was captivating from the first note to the last. Accompanied by his full band, and a glass of wine, Ben took to the stage to the howling sound of A Boat To An Island On The Wall. Spacious textures and deep electronics quickly set a solemn ambience, before his steady voice aligned with an acoustic guitar. The stage production adds in to the charm as well, with the big screen projecting a distorted swift imagery alongside a rig of subtle lights that synchronised with the vivid pinks and blues that keep flooding the whole stage at times.

Straying away from musical conformity, Ben Howard has always done things his way. His unique approach to songwriting and introspective lyricism has earned him a vast following all around the world. He may however, strike as an introvert. Reserved but completely focused on his set, Howard does not engage much with his audience (except a few words of gratitude), yet he had them all in the palm of his hand. Always somewhere between a dream and reality, he laid the foundations of a whole new universe allowing it to flourish in time. Each song felt like an entirely different realm and we’ve been invited just for a brief moment.
A set almost entirely of songs from ‘Noonday Dream’ set quite a pensive mood throughout. We experienced Towing The Line, which is a complex offering that opens a much wider sonic pallete. Led by Howard’s hypnotic vocals, it gently carried a harmonic yet unsettled tale. There’s Your Man unravels more upbeat rhythms, whilst Nica Libres At Dusk introduced us to the swaying chorus. 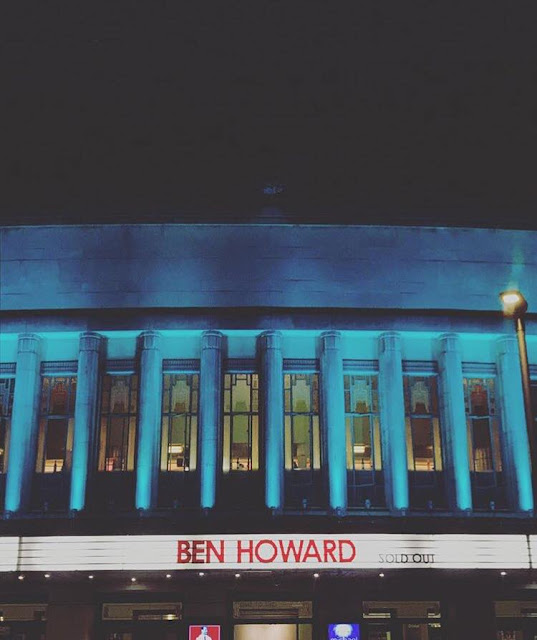 Elsewhere in the set, taken from his sophomore record, I Forget Where We Were, Small Things and the title track evoked the biggest applause. Springing guitar licks of the first and the lingering notion in his voice on the latter beautifully captured the urgent spark that fills up the whole album.
As Murmurations round off the main set, we dove into a contemplative pattern once more with the peaceful clips of nature being displayed on the screen. Next, returning for a highly demanded encore, the passionate End Of The Affair reached an impactful crescendo before colliding with the absolute masterpiece Promise. As the only nod to his debut album, ‘Every Kingdom’, the song makes a blissful ending to the emotional journey we’ve been on.

It was a divisive set. On one hand confirming Ben Howard as a genius. On the other, the omission of much of his debut album or even earlier EPs may be difficult to understand. But then again this is not a festival setlist.

No one said music was supposed to be easy. Sometimes it requires your full presence and attention. Sometimes it dazzles and soothes, or simply hurts. Few artists have mastered to translate their thoughts and emotions into their songs so thoroughly as Ben Howard. Reminiscent of a spiritual experience, his music reaches the depths of your soul, mind and everything in between. And that is perfectly fine.

Ben Howard played:
A Boat To An Island On The Wall
Towing The Line
Someone In The Doorway
All Down The Mines
Agatha’s Song
There’s Your Man
What The Moon Does
Untitled
Small Things
I Forgot Where We Were
Nica Libres At Dusk
Murmurations
-- [Encore] –
End Of the Affair
Promise