Music festivals in the UK used to mean several days of camping, eating and breathing all things music with the odds-on chance that by the end the campsite would be submerged in mud, the portaloos beyond description and the overwhelming feeling being the need for an urgent holiday to aid recovery!

Not anymore, the uprising of the one-day festivals has opened them up to anyone who loves music and want the festival experience without needing a tetanus jab. One of the best one-dayers is Community Festival held in Finsbury Park, London which took place on 1 July.
As with any similar event it’s difficult to catch every band at Community Festival even though there are only 2 stages and they’re quite close together. Mostly the set start times were slightly off-set making it possible to get the most out of the ticket and catch some new and some well-known bands. The recurring theme of the day was the football World Cup and most bands managed to work in some football related theme including wearing football shirts, renditions of football songs and inflatable footballs bouncing round the crowd! Those acts that didn’t work in “it’s coming home you know” were in the minority!

First up for IAI was Ten Tonnes on the second stage:
The smile on Ten Tonnes’ (Ethan Barnett) face as he looked over the crowd showed how important this was to him. ‘Cracks Between’ and ‘Born To Lose’ were the opening tracks and it was obvious that the Ten Tonnes army was watching as they seemed to know all the words! Ten Tonnes sounded like he had it all under control and we legged it over to the main stage to catch Marmozets.

Marmozets’ Becca Macintyre is one of the best band frontpersons (female and male) in the business. She’s a force of nature and it’s hard to take your eyes off her. What makes Marmozets even more appealing is that all the band members are extremely watchable with all 5 doing stuff. Drummer Josh strikes a pose standing on his drum kit while the other 3 tear around the stage. Marmozets opened up with ‘Play’ from the most recent album ‘Knowing What You Know Now’ and the crowd started bouncing. ‘Move, Shake, Hide’ and ‘Why Do You Hate Me?’ were massive crowd pleasers from the first album ‘The Weird and Wonderful Marmozets’ and Becca (by this time shoeless) dominated the stage. They finished up with ‘Major System Error’ and the standard was well and truly set for the next bands.

Sundara Karma are festival favourites wherever they play. Lead singer Oscar Pollock’s vocal ability and flamboyant dress style are discussed equally and the band played banger after banger from their album ‘Youth Is Only Ever Fun In Retrospect’ with ‘She Said’ becoming one huge singalong. Pollock told the crowd that recording for album number two was starting the following day (2 July) and that “it’s gonna melt your brains”.

The first and most annoying clash at Community Festival came next when Yungblud and Rat Boy were on the different stages at the same time. Choices had to be made! 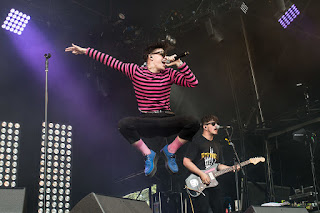 Yungblud is everything that fans and industry needs in a young performer. He catapults himself onto the stage like he’s about to do a series of front flips and somersaults. You’ve barely had the chance to focus on him and he’s off again. High energy doesn’t even begin to describe Yungblud’s set. This set was the first annoying clash at Community Festival as Rat Boy took to the main stage minutes later. Yundblud’s album ‘21st Century Liability’ is released 6 July 18 and his excitement for this spread through the crowd. ‘I Love You, Will You Marry Me’ is the stand-out crowd favourite at the moment but the depth of song-writing talent demonstrated in the songs released from the album so far clearly identify Yungblud as someone with exceptional talent. 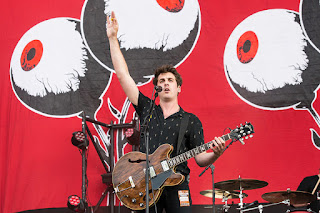 Circa Waves distinct artwork and backdrop on the main stage was enough to get the excitement building for their set. Having 2 albums (‘Young Chasers’ and ‘Different Creatures’) worth of songs to choose from meant that every song was a crowd pleaser. They ripped straight into ‘Wake Up’ from the latest album ‘Different Creatures’ and then played a selection from both albums finishing up with arguably their best known song ‘T-Shirt Weather’.  Lead singer Kieran Shudall’s confidence and control over the crowd was mightily impressive. I turned to look at the huge sound tower during Circa Waves set where the band’s family and friends could be seen near the top singing along with their arms in the air. Obviously a joyous occasion for both them and the crowd and the epitome of what a family festival is about. 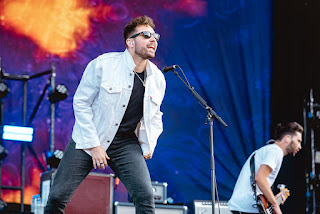 You Me At Six – With album number 6 (aptly named V1) out in October 18 YMAS has a massive number of crowd pleasing songs to choose from. They came on stage to ‘Room To Breathe’ and the tone was set. Old fans knew it was going to be sublime and new fans were hooked. Josh Franceschi covered every inch of that huge stage, he worked the audience up like the pro he is and the mixture of songs from across all albums was genius. New songs ‘3am’ and ‘Fast Forward’ gave a taster for the new album. Plenty of banter and chat from the band and Franceschi looked as if he couldn’t be any happier. He forgot the words for ‘No One Does It Better’ but it didn’t matter as the crowd knew them anyway!  Finishing on ‘Lived A Lie’ Franceschi reminded people that they’re playing at Brixton Academy in November with Marmozets supporting.

The Vaccines – Mixing old and new songs from their 4th album ‘Combat Sports’ (which was released in March 18), this was always going to be a crowd- pleasing set. Following on from a quiet couple of years ‘Combat Sports’ put the band firmly back in the public eye. They played a brand new song ‘All My Friends’ for the first time live but they also played old favourites like ‘Teenage Icon’. There’s something for everyone in The Vaccines festival set list proven by the mix of ages in the crowd all united in adoring this band.

Tom Grennan - Fresh from TRNSMT Festival the day before Tom Grennan headlined the second stage with his contagious enthusiasm for the football world cup marking him as one of the lads. The last 12 months has been spectacular for Tom Grennan and both his collaboration with Chase & Status and his performance at F1 Live London has marked him as a main stage future headliner for sure. Vocals that send a tingle down your spine this show was everything you’d expect. The set included ‘Sober’ ‘All Goes Wrong’ ‘Royal Highness’ and ended with ‘Found What I’ve Been Looking For’ which closed the second stage. Tom Grennan’s debut album ‘Lighting Matches’ is out 6 July 10

Two Door Cinema Club – Everyone knows loads of TDCC songs. They just don’t always know it! Playing the headline set at a festival is always special and the lighting and the pyrotechnics all helped to set the scene. Even the crowd flares (how they got them in I don’t know) added to the atmosphere and colour as TDCC worked their way through an epic 19 song setlist opening with ‘Undercover Martyn’ and including ‘Bad Decisions’, ‘What You Know’, ‘Something Good Can Work’ and finishing with ‘Sun’ to a background of fireworks.
It was the perfect end to one of the hottest days of the year and one of the most chilled festivals in the calendar (apart from the blistering heat that is!). 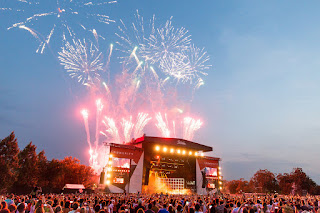