Posted by Richard Maver on August 30, 2018
Upon arriving at Scala, there is a heavy air of anticipation, but also an omnipresence of accomplishment. A sense of humble confidence. In the main lobby, there is a ‘Stranger in the Alps’ glossy backdrop for all those ‘gram opportunities, a packed-out merch stall, and many flowing drinks. Entering the auditorium, there is a live projection of a pair of hands sharpening a clutch of pencils into shape. The hands belonging to Chris Riddell, a British illustrator and political cartoonist. These hands would add to the show, sketching along live to the next hour of music. The illustrations providing the backdrop to some gloomy, deepest, or amusing stories provided by Phoebe Bridgers and her band.

What with the fairy lights twined about the microphone, and the dance of Riddell’s sketch hand, Scala feels more like a creative’s bedroom than a venue tonight. But for the talent of its occupant, the entire experience could be a private sad song session for a lucky audience.

As the lights blur, a silence descends upon the now completely full room. Three musicians in dark suits and ties walk (see Motion Sickness below) on the stage followed by Phoebe Bridgers in her now traditional ghostly gossamer white dress. It’s an almost religious scene as Bridgers gently launches into ‘Smoke Signals’ in front her album cover background with a luminescent ghost painted superficially. This, the opening track of her critically acclaimed debut album Stranger in the Alps, shows her delicate vocals wrapped in the blanket of Harrison Whitford’s guitar. 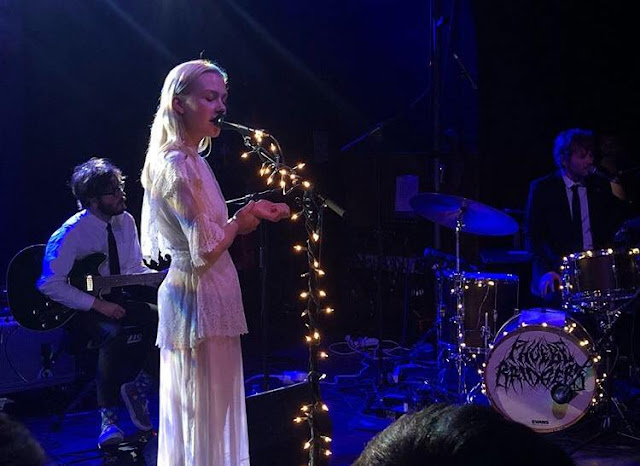 As the first notes of ‘Funeral’, a haunting song about a friend’s overdose, echo across the room; the audience seems to have stopped breathing. There is almost silence (just the puff from the “world’s loudest smoke machine”), hardly a phone screen raised above the crowd is visible. Such is Bridgers’ influence, her unassuming but beguiling presence, no-one seems to even want to take a breath for fear of breaking the spell and ruining the moment.

Bridgers splits her attention between gazing out at her in-awe fans and looking up to the side wall to admire the spiritual hand of Chris Riddell, turning each song into an atmospheric snapshot in just a few minutes (see Poems To Live Your Life By, which incorporates ‘Smoke Signals’). But despite this arresting activity, the audience remain mostly focused on the stage.


The double-header of ‘Killer’, an essay of an evening spent watching a documentary of a serial killer, and an acoustic ‘Steamroller’ (my personal favourite), a track from an early EP that mysteriously never made it to the album, is devastating. The simplicity of the two melodies combined with cleverly twisting lyrics illustrating the gently dangerous allure of combining love and depression hangs heavy. The echo of “Part of me wants you, but most of you needs you” brings shivers and almost tears.

With a change, the mood lightens as Bridgers is joined at the microphone by drummer Marshall Vore to perform a beautiful cover of Gillian Welch’s ‘Everything Is Free’ (to which Bridgers refers to as a song about “online streaming”), before rolling out banger ‘Motion Sickness’. The crowd finally breathes, as the at times highly amusing autobiographical song allows a moment of wry smiles and nods, as well as some heavier instrumental purpose.

‘Scott Street’ closes out the set. Here, it seems that we may actually survive this show with some of our heartstrings intact. However, the encore of a stripped back ‘You Missed My Heart’ pulls them yet again. But as if knowing she couldn’t leave like this on the final night of her ‘Farewell Tour’ she plays ‘Me & My Dog’, a track from her upcoming collaborative EP with Julien Baker and Lucy Dacus (see BoyGenius). The finale of which brings raucous harmony and powerful vocals; something we don’t see very often from Bridgers. If this is anything to go by, we can expect some more ‘jangle pop’-inspired stuff for the future.


It’s comforting to know that as this chapter ends there is no sense that Bridgers is done. She has plenty more dark, twisted, heartbreaking and heartwarming anecdotes to share. But for now she’s gone, casually drifting off leaving everyone breathless, bruised but at peace with the gloom of the human condition and psyche.

Not only has Phoebe Bridgers produced one of 2017’s most accomplished debut albums, she now convinced over a thousand Londoners that she is flawed (“I can’t smoke weed without having a panic attack”), funny (“I’m gonna bring it down a little”, she quips after a melancholy masterpiece), and extremely able.
The evening is an intimate and flawless presentation of Stranger In The Alps’ dysphoric tracklist, and a welcome reminder of the invention and charm of the woman behind it. I urge you to enter the world of Phoebe Bridgers.