Posted by Chris Graham on November 16, 2018
Innovative Dutch producer & DJ Bakermat has unveiled the official music video for his new single ‘Partystarter’, centred around animated dog ‘Matt Baker’ who aims to bring the real essence of house music back to the world.

Jetting into the planet from Earth, dressed in Bakermat’s iconic red-jacket outfit, Matt Baker wakes up a sleepy city packed with guitarists, lazy pianists, and selfie-takers, by bringing the vibrant beats of ‘Partystarter’ to the crowd. With the bass soon reaching maximum levels amid the euphoric audience, the performance is catapulted back into the solar system, proving Bakermat’s title as a true global ‘Partystarter.’

With Bakermat’s previous singles ‘Lion’ and ‘Do Your Thing’ paying homage to the electronica sounds of classic acts like The Basement Jaxx, The Chemical Brothers and Moby, the Amsterdam-based producer goes further down the road of vintage electronic music on ‘Partystarter’.

A blend of rock, surf and big beat, the single will remind fans of legendary cuts such as Groove Armada’s ‘I See You Baby’ and Fatboy Slim’s ‘Rockafeller Skank’ - but with a contemporary twist. Built around a raging surf guitar, rhythmic hand claps and a clashing of pianos, bongos and cowbells, the track is a bonafide party starter, and one of Bakermat’s most experimental so far. 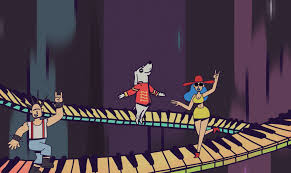 “I’ve never produced a track this fast, loud and heavy before in my life,” added the Dutch star, whose previous track ‘Living’, has amassed over 65 million Spotify streams.

Besides his studio creations, Bakermat often distinguishes himself with his live performances as well. Adding live musicians at his performances and hosting his own concept ‘Bakermat presents The Circus’, the series has touched down in cities like London, New York, Amsterdam, Paris and Rio de Janeiro in recent years, with Bakermat also hosting regular stages at Tomorrowland, Airbeat One Festival and various other big festivals.

The hugely entertaining video for ‘Partystarter’ is out now, with Matt Baker expected to be seen in many future releases!