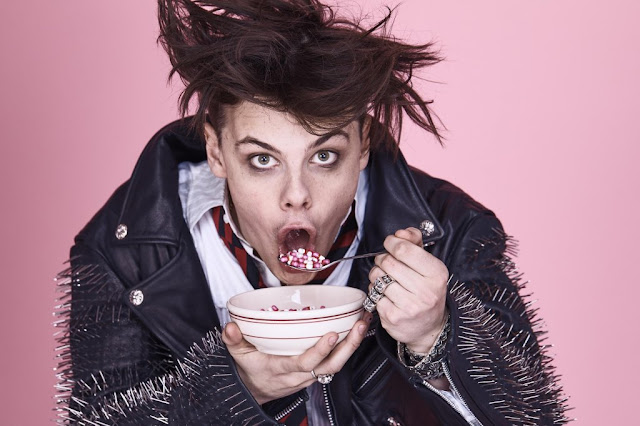 YUNGBLUD. A name that's very much in the mouth of all the right people at the moment, the monicker of Dominic Harrison, a burgeoning alt-rock artist with a diehard fanbase that's rapidly spreading from the UK to the world.

2018 album 21st Century Liability is a slick mixture of genres from across the spectrum woven together by Dom's unfiltered and socially conscious aesthetic. Ska, hip hop, pop, rock, punk and so much more are syphoned through his hyperactive delivery in an imitable fashion.

This hyperactive delivery extends to his live performance and current 24-date European tour, which we caught in Brighton at intimate venue The Haunt. He took to the stage without support, to an almost earsplitting reception from the sold-out venue, which clearly fuelled his fire as his energy levels were through the roof for the entirety of the 90-minute performance. Totally in his element on stage, he had complete command of the highly engaged crowd as he navigated through much of his back catalogue, only taking brief intermissions between each song to share the moment with the audience.

A true performer in every sense of the word, rarely do you encounter an artist with such a stage presence, a sense of self and exuberant confidence. The encore saw a performance of his most recent and most popular songs to date and a surprise appearance from a certain guest, which was the cherry on top of an incredible show.