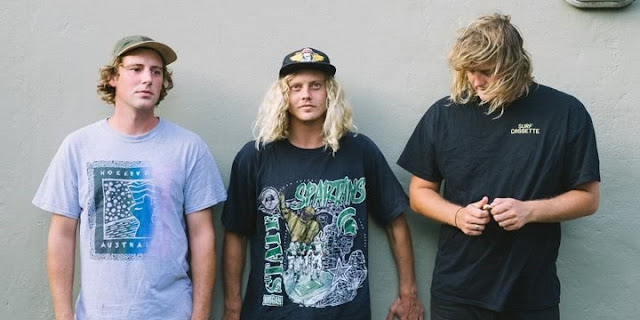 
Australian surf punk rockers Skegss return to the U.K for the second time in less than a year on following the release of their album My Own Mess.

The crowd is awash with Australian accents, something so familiar to these gigs. These loyal fans have got their merch on, and they’ve all gone for drinks together before the show, which they organised on the bands Facebook group ‘skegss skateposting’.

No one here is a stranger if you love Skegss. This I learnt at my last Skegss gig in November 2018 when someone threw a pint over the sound desk. The band and crowd sat on the floor of the venue and sang along to the sound of a practically mute electric guitar. At least we know why they didn’t return to Leeds this time around.

In the support slot tonight we had Gaffa Tape Sandy, a special night for the rock trio as they celebrate the release of their debut album Family Mammal. Jeering a hello to his mum in the crowd, the guitarist exudes the bands excitement of the achievement, and their eagerness to be playing with Skegss iconic flame logo hanging behind them. With this, The Dome is quickly filled with a mosh pit, all started by a few tentative shoves.

This set the tone for the rest of the night. Within the opening notes of ‘Smogged Out’ a girl made her way onto the stage to be the first stage diver in a seemingly never ending line. A few songs in, the band tell the crowd that they should be listening to their bandcamp as they play heavier, grungy track ‘Glow in the Dark’ which is exclusively available on the platform. The band revel is this change of tone, swinging their guitars round their necks and abounding their signature catchy vocals. The set then builds up to crowd pleaser ‘L.S.D’ that has the whole crowd singing the high pitch chorus, all sounding like a bad Snapchat filter.

Mid way through the set Benny and Toby swap instruments and places on the stage, swapping the role of front man/ lead joker.  Somehow over the insurmountable noise Toby hears someone shout “play something by the Chats”, this he deems the “best chat he’s ever heard” and hits out a wobbly line of the fellow Aussie’s Chats viral smash ‘Smoko’. Toby was also donning a Drunk Mums shirt, another Australian band in this seemingly endless group of friends.

Bringing back Skegss classic ‘New York California’ Toby yells the lyrics at the chanting crowd, which slowly become less and less coherent as he jumps into the audience and joins the large circle pit which is engulfing the whole space.

The band treated the crowd to their popular cover of the Pixies ‘Here Comes Your Man’ which they first covered for Australian radio station Triple J, a Radio 1 live lounge type feature. They joked that they don’t have time to rehearse their own songs because of this cover and that “refunds are on the door”.

Benny started saying his goodbyes, ready to leave the stage, but was silenced by the crowd chanting for ‘Spring has Sprung’, to which the band quickly caved. Ben ended the set by throwing his wallet off stage, then himself, for the most comfortable looking crowd surf of the evening.

It is so exciting to see the Australian punk scene infiltrating the U.K, with the bands mentioned and the likes of Amyl and the Sniffers taking the rest of the world in their stride. Skegss may not be the most polished band, but they certainly prove that you don’t need more than three instruments and some crowd surfing to have fun.