Posted by Chris Graham on August 15, 2019
Bristolian singer-songwriter RVBY returns with the official video for her latest single ‘Hanging On’.

Reflecting the youthful, teenage love elements of the track, the visual is a nod to RVBY’s passion for football. For a while it was football, rather than music, that dominated RVBY’s field of vision. From joining the boys’ team in primary school she progressed through Bristol Academy then Somerset Academy, briefly going professional with a stint in Yeovil Town Ladies. 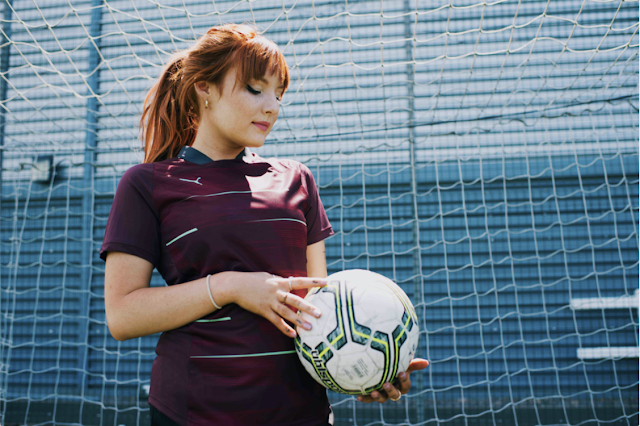 Inspired by the empowering noughties movie Bend It Like Beckham, the ‘Hanging On’ video follows a strong-spirited female protagonist (RVBY) as she balances her preparation for a big football match, and her growing feelings towards her coach. Much like the film, the ‘Hanging On’video has a motivational message for aspiring women, with a fun, lighthearted tone.

Speaking on the idea behind the video, RVBY shares “Football has been such a huge part of my life. With the recent World Cup inspiring so many women to get into the game, I wanted to create something that would impact this even more. If you remember Bend it Like Beckham then this will also act as some amazing nostalgia! The concept is inspired by love, heartbreak, but most importantly 100% girl power!”

With an unmistakable Swedish pop sensibility, ‘Hanging On’ pairs RVBY’s impressive vocal range with a shimmering, massively uplifting backing beat. It marks the first time RVBY has worked with producer Toby Scott, who has previously written material for Little Mix, Girls Aloud and Call Me Loop.

‘Hanging On’ is the 20-year-old’s third career release, following on from ‘Honey Bee’, a quirky, cutting-edge pop song with an inspiring message, and last year’s mesmerising debut single L.O.V.E. She has also recently played Dot to Dot Festival, Liverpool’s Sound City and with BBC Introducing’s Abbie McCarthy for one of her Karma Club events at London’s Sebright Arms.

With further releases in the pipeline, RVBY is firmly in the ascendancy.