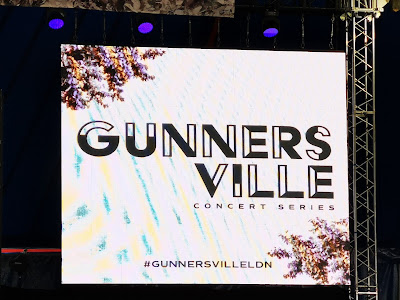 Day 3 of Gunnersville Festival marked the end of summer 2019 outside festival season for me. It was like a hybrid of outside and inside to be fair with a massive big top and an equally massive stage. The sky was blue and the temperature high and it felt like the last day of the summer holidays. There’s also something special about the people that go to the heavier rock festivals and the feeling that no-one actually plans on moshing anyone into the ground. People are far more likely to help you up and chuck you back in the pit again!

Gunnersville was headlined by You Me At Six playing all of their 27 singles in chronological order who said, during an interview at this year’s Reading Festival “we’ve always wanted to do something similar to this but we’ve never had enough hits to fill up a full massive, hour and 45 minute set so after we released this record it was like wow we’ve now got 6 albums and the new single. We’ve played a lot of festivals in the UK if we’re going to headline one and do something special how can we make it different. We’re a band that feeds off the crowd so if they’re getting into it we go pretty wild”.

Milk Teeth had the unenviable task of opening up the stage and building up the crowd numbers as people arrived into the festival. Vocalist/bassist Becky Bloomfield took control of the crowd from the opening song ‘Vitamins’ to the finale ‘Stain’. Adding in some phone torch/lighter waving during ‘Swear Jar’ baselined a great vibe to start the afternoon off.

The British/American band As It Is won the day for microphone tossing skills. No question. Singer Patty Walters announced that ‘The Question, The Answer’ song from the 2018 album ’The Great Depression’ would be the heaviest song played all day and opened up a huge mosh pit.  This energy lasted for the whole set and marked As It Is out as one of the star performances of the day. 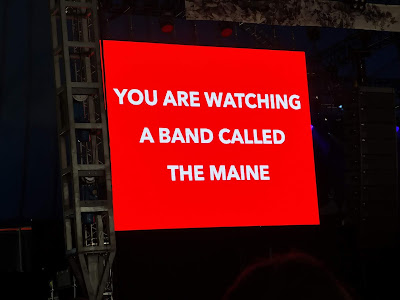 The Maine. Judging by the amount of Arizona band The Maine’s t-shirts in the Big Top there were a lot of fans there. But just in case it wasn't obvious who was on stage the big screens were there to help. The Maine pulled a fan up on stage to sing along. This probably would have gone better if the lad had known any of the words!  Excellent set from this band and massive support evident for them too. They followed up their set with a huge meet and greet just outside the Big Top which caught security off-guard with the numbers of fans wanting to meet the band and get merch and parts of their bodies signed!

Sundara Karma is an excellent festival band but even lead singer Oscar Pollock expressed confusion as to why they were on the bill among the heavy rock bands. They played a solid set with a mix of hits from ‘Youth Is Only Ever Fun In Retrospect’ and the new album ‘Ulfilas’ Alphabet’ and won some new fans.

Deaf Havana opened up with ‘Boston Square’ and played several songs from their 2018 album ‘Rituals’. Frontman James Veck-Gilodi had the crowd singing back to him throughout the set. There was a lot of love in there for this Norfolk band.

Jimmy Eat World were the final band to play before the headliners took the stage. In an interview at Reading Festival YMAS said that Jimmy Eat World was one of their favourite bands so for them to be on before YMAS was “a bit of a dream come true”. They’re a headline band in their own right and having a back catalogue of nine albums meant their set list was packed with quality. Debuting the track ‘Criminal Energy’ live was a highlight and the appearance of YMAS’s Chris Miller to duet on ‘Hear You Me’ was a special moment. 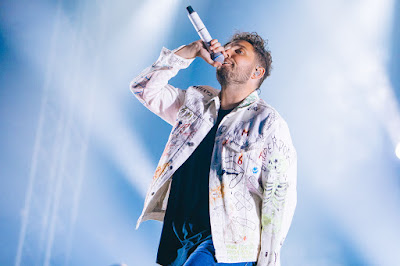 Photo: Josh Franceschi from You Me At Six Official Festival Republic Image by Lewis Evans

Finally it was time for You Me At Six to play and they didn’t disappoint. From the moment frontman Josh Franceschi ran across the stage until the very last note it was high-octane, full throttle brilliance. Starting with ‘Save It For The Bedroom’ and finishing with ‘Straight To My Head’ they played all 27 singles. They usually end with ‘Room To Breathe’ and so after that was played it felt like they were onto a really long encore. That was the only thing that didn’t feel right to me, bands usually end with their biggest hits but YMAS continue to re-write the rules!  Franceschi’s near miss with the pyros came during ‘Loverboy’! He said that “today is not a day for dying and I’m not planning on dying” but he had missed the soundcheck and didn’t know the flame cannons were going to go off in that song.

And that concluded Gunnersville Festival. Things to remember for next time –
the sound quality varies depending on where you stand (like all festivals) and it’s worth moving around during the first bands to find the best spots and most importantly there are no lights in the portaloos! 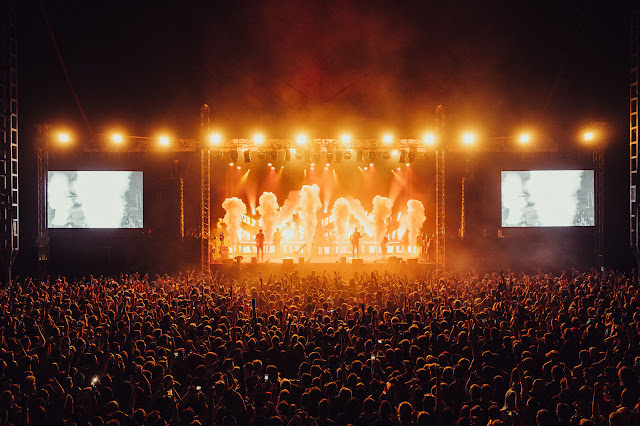 Photo: You Me At Six Official Festival Republic Image by Lewis Evans