Posted by Chris Graham on February 23, 2020
Australian electronic outfit Northeast Party House have shared 'The Desert' - a final taste of what's to come from their upcoming third studio album, Shelf Life, due for release on 28th February via Sony Music Entertainment Australia.

The perfect sonic amalgamation of their previous guitar driven records met with the electronic textures traversed throughout the new album, ‘The Desert’ continues the bands exploration into more of a dance leaning sound while still holding close the vitality of the live-band element fans have come to know and love from Northeast Party House. "We’ve always been interested in creating music that blurs the lines between what you’d expect to hear from a live band and what you’d expect from an electronic producer and that was the goal we set out to achieve on this track" says songwriter and guitarist Jack Shoe. 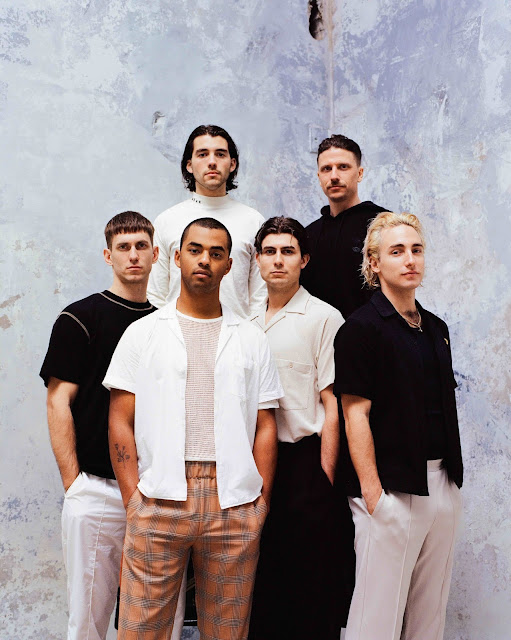 One of the first songs to make the shortlist for the album, ‘The Desert’ was written in response to the frustration felt by band members Zachary Hamilton-Reeves and Oliver Packard who, as much of the world has been, were struggling with the state of the earth and climate-change pessimism.  Speaking of the tracks creation Packard said:  "Zach had put down this great moody melody over the verses that evoked a Mad Max post-apocalyptic desert, Sean had chopped up some of Zach’s vocals to make this cool soaring chorus hook, and I was working on lyrics. I found this song felt like the perfect sonic partner to those anxieties, fears and hopes. The heat is rising, your mouth is dry, the desert is immense, but we’ve got to persevere.”


'The Desert' follows the release of title track 'Shelf Life' - an immediate fan favourite and the centerpiece of the record which was inspired by the band’s marathon bender at Berlin’s infamous Berghain nightclub, as told through the eyes of lead singer and songwriter Zachary Hamilton-Reeves. “My knees are getting wobbly, my face is real sore, I feel like, fuck this, it’s time. Someone said, ‘You look tired,’ and I am. And Jack said, ‘let’s just have one more.’ But I can’t. I’ve reached my shelf life.” Conceptualized and self-directed by the bands very own Sean Kenihan at the helm and D.O.P Edward Goldener back on board, the band recently shared the music video which is inspired by Northeast Party House's love of iconic music videos from the 90's and early naughts. "The look of that whole period is really nostalgic for us" says Kenihan.

Over the past ten years, Northeast Party House have performed on festival stages and sold out headline gigs throughout Australia as well as playing to thousands of fans across Europe and the US. Now, following a three-year hiatus, they’re back with their most sophisticated album to date, Shelf Life.  Mixed by Drummer Malcolm Besley, the record was motivated by a desire to create “huge dance moments” paired with their most thoughtful, personal lyrics yet. The band also teamed up with an external producer for the first time, Kim Moyes of The Presets.