Posted by Unknown on March 03, 2016
If you imagine a really camp version of the social club that plays host to Does It Offend You, Yeah?’s amazing 'The Monkeys Are Coming' video, then you’ve got a pretty good picture of the Moth club. The ceiling is laced with gold glitter, the word MOTH is written in secondary school style cut-out cardboard at the back of the stage and there is the kind of sticky wooden dancefloor no self-respecting wedding reception would do without. In short, it’s the perfect venue in which Yuck launch their new album, ‘Stranger Things’. 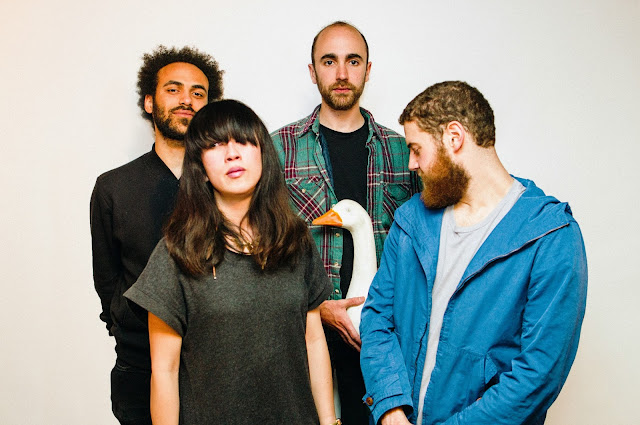 Two support acts play to the slowly building crowd. First up is the fantastically named Shark Dentist, who open with one of the least accessible songs I’ve ever seen at a concert (and I’ve seen Bo Ningen) before cruising through a selection of thrillingly wonky slacker-punk anthems. Theirs was a compelling set, which had me whipping out my phone and hitting ‘like’ on their Facebook page (what times we live in!) so I can keep track of what these upstarts get up to.

The second act up are the loud and proud Puppy. I guess the name is some kind of intentional juxtaposition  as I wouldn’t describe their sound as ‘cute’. What they do deliver is a fine platter of tasty riffs and epic songs pitching somewhere between Deftones, REM, Green Day and even Iron Maiden in some of the unabashedly placed pinched harmonics and harmonised guitars solos.

Finally, scuzz-indie legends Yuck take to the stage and Max Bloom strums the fuzzy opening chords to ‘Stranger Things’ opener ‘Hold Me Closer’. From here, Bloom, bassist Mariko Doi and guitarist Ed Hayes continue an aural assault with their combined axe-work and vocals, backed by pumping drums. Signature tune ‘Get Away’ gets an early airing, inspiring the first mass sing-along of the night, as well one of the most awkward stage invasions I’ve ever seen, leaving the band totally bemused.

Further set highlights include recent single ‘Hearts in Motion’ replete with infectious hooks, and the monolithic ‘The Wall’ taken from their self-titled debut album. The band close their main-set just as the crowd is reaching its raucous peak, causing the oft times routine chants for an encore to feel genuinely desperate. And the band don’t disappoint as they return to perform two more tracks. The first a mellower cut from their most recent album, the second, and final track of the evening, the invigorating poptastic barnstormer ‘Georgia’.

Bloom had earlier revealed he lives just 5 minutes from the venue, and I don’t have time to find out whether his offer to the crowd of ‘after party at my place?’ was genuine or not as I have to dash to catch the last train home (which I missed... Worth it.). However as we burst out of the venue we see the frontman chilling outside with his parents,  which seems apt considering the fun all-ages brand of uncool the venue radiates. The entire night is pleasantly free of any pretension in any of the acts, or indeed the beer soaked audience. There’s some solace in that as I tackle basically every form of public transport to get home (and also in the fact that my mate had a worse time of it, sorry Cameron).