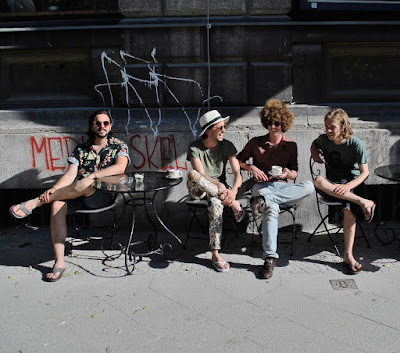 Brand new video from our favourite Brighton 'tropical world-alternative folk' band Time For T. Although with new song 'Rescue Plane' we see a slightly heavier, raw side to them but then with a nod in the outro to their sun shimmering sound. The song talks about yearning and long distant relationships.

Frontman Tiago Saga is known to break into a Ian Curtis style frenzy when performing this song shouting, "now they're at war with their distance" then breaking the seriousness with the cheeky line "rescue planes crash too, then you need a rescue plane for the rescue plane rescue".

Time For T love performing live and gathering an army of fans everywhere they go. Last year against the will of their friends and families, they played in Beirut a week after the attacks to a highly appreciative audience. They are back on the road this summer with a widely extensive tour around the UK and Europe. 'Rescue Plane' is out today and available to purchase digitally everywhere.