[LISTEN] We Are Wolves 'I Don't Mind' [IAI PREMIERE] 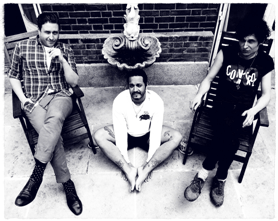 We Are Wolves… around since the tidal wave of electro/art/dance/punk broke at the beginning of the year 2000s, they’re the only ones left standing. The wolves are still on the prowl. With their new album WRONG, available from 30th September  on the enigmatic Montreal label Fantôme Records – rebellious younger brother of Simone Records – We Are Wolves have wiped the slate clean and have gone hunting for some new musical prey.

WRONG. One word: short, sharp and cuts right to the chase – that nonetheless arouses a certain perplexed curiosity. With their fifth album, the band unashamedly shows off its pop side, that until now we’ve had little more than a whiff of. In June, WAW gave us a taste of things to come with two mouth-watering singles Wicked Games and I Don’t Mind.

Recorded in New York, France and Montreal, WRONG sees the trio – bassist and vocalist Alexander Ortiz, keyboardist Vincent Levesque and percussionist Pierre-Luc Bégin – show off their penchant for the edgy pop of bands like Depeche Mode, New Order, Ultravox and The Cure, without losing the bite that has defined their sound.

They’re just off to Germany to perform at Reeerbahn Festival among other Deutschland shows.

Here at IAI, we are privileged to be sharing the single 'I Don't Mind', which is a UK exclusive.