Posted by Jason Hare on October 29, 2016
The lads have gone from strength to strength in recent years and their latest tour has seen them draw in some bigger crowds from around the country. Zach and Alex took a little bit of time out just before going on stage in Hull last month to have a quick interview with It's All Indie and this is how it panned out...

Jase Hare: Zach, Alex... thank you kindly for taking the time to talk to us, did you know you had kicked off sessions in my bar at home? You guys being the first to play in The Hare & Hound has sparked several sessions since...

Alex Townsley: Yeah really well! We were just saying we're really overwhelmed at some of the crowds and support we've been getting. 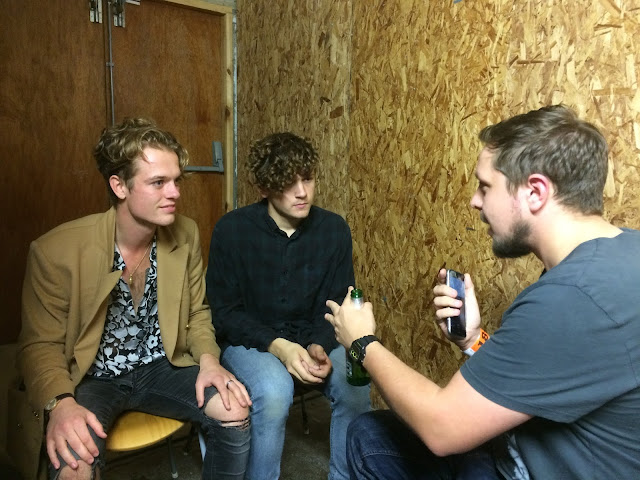 JH: What's been the highlight so far?

ZL: Definitely York but it always goes off there! We've got a solid fan base there obviously but it's still mesmerising seeing 500 tickets sell out. But when we play Nottingham which is two hours away, and yet nearly 100 people turn up, that kind of gives you a bit more of a kick like "Where did these people come from? How do they know about us?" kind of thing.

JH: Has the club NME gig at Koko, London been and gone? How did that go? That must have had a few new fans converted to KNO?

ZL: So amazing! To play Koko itself was just mindblowing anyway.

JH: How did that come about if you don't mind me asking, have you actually gigged down London way much?

AT: Not really no, but they're usually industry gigs so someone at the label might have got us the slot kind of deal. But there is definitely something happening in the North outside of London so we kind of want them to come to us in the future haha.

ZL: Also save us the train money haha.

JH: Yeah get them all crammed into Fibbers! I've seen you guys a couple of times now obviously at Fibbers and they are special gigs but you hinted at big crowds at places like Nottingham which isn't your home fan base, the crowd that's gathered already here in Fruit, Hull, is cracking! Are you guys feeling the benefits playing live to bigger and better audiences? Cos I remember seeing you in Hull at, was it the Welly club playing with Affairs?

AT: O'reillys I think.

JH: Yeah O'reillys and genuinely there were literally 6-8 people there wasn't there! So your hard work and persistence is proved right here in the same city.

AT: There's definitely a buzz now and it's everywhere we go around the UK so that's special, when the people down the front know all the words aswell that's always cool to see. We used to do gigs and say that we're playing a new song but nobody really cared because every song of ours was probably a new song for them. Whereas now we say we're about to play a new song and people get excited because they know our stuff and want to hear new tunes. Even knowing the spoken word part in 'Stay Close'

JH: The video for that is really slick by the way, who's done that?

ZL: ermm a company called Cosmic Joke, Manchester based and they have an office near our manager. We met up, had a drink and they agreed to do it.

JH: Looks really smart! Well again guys I really appreciate your time pre-gig and for anyone who will eventually read this they gave us beers so a special mention to Alex for that, very kind sir!

AT: No problem at all haha.

JH: Really looking forward to this gig and if you neglected to catch them on this tour I have no doubt there will be another tour shortly around the corner???

Both: We couldn't possibly confirm anything now haha we'll see.


Low and behold the lads have enjoyed their recent tour so much that what they couldn't tell me at the time has now been confirmed. Fancy a festive flirt with new musical talent... see below, sort your act out, give someone an early xmas present... either way, get yourself there!

Thanks for reading! and thank you again to KNO. Great lads. I did a gig review previously which you can read... KNO - GIG REVIEW