Posted by Chris Graham on October 19, 2017
Riding high on a wave of praise following their most recent single ‘Just Touch’, Hull-born Leeds-based four-piece The Hubbards are a band with the world at their feet. Having already notched up supports slots for the likes of stadium stars Foals and The 1975, not to mention a coveted slot at this year’s Radio 1’s Big Weekend, the mainstream success is very much theirs for the taking.

With a sound both timely and timeless, it’s of little surprise that sets from the band at this year’s Great Escape and Dot to Dot festivals drew impressive crowds; their contemporary take on ‘90s slacker pop speaking volumes to an already burgeoning fanbase. 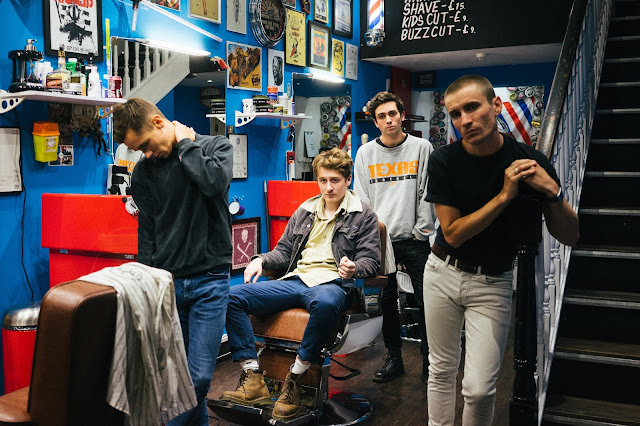 Taking the effervescent energy of indie-pop buzz bands such as JAWS, and combining it with an irrefutable tenacity that owes far more to punk’s DIY ideals than the polished production of the aforementioned, The Hubbard’s occupy an uncharted middle ground, bridging the gap between mainstream indie-pop and hipster swagger, a formula that has seen their material aired on both Radio One and 6Music, while previous single ‘Cold Cut’ was used on ‘Made In Chelsea’.

Far from being a band to rest on their laurels however, The Hubbards are set to release ‘Body Confident/Easy Go’, a AA side that exhibits two different sides to the band effortlessly. While ‘Body Confident’ will be familiar to established fans of the band thanks to it’s deft balancing of crunching guitars and woozy melody, ‘Easy Go’ offers up a slower, somewhat more refined side to the band, bringing to mind the likes of Pavement or early Weezer, all delivered with a wry smile and the trademark tenderness that’s become synonymous with The Hubbards.

Though influenced by years of songwriting tradition, it’s clear that they’re are a band with their eyes to the future. And with the past couple of years being as good to the band as they have, and with the new material marking yet another progression for the four-piece, it’s looking like a very bright future indeed.

Support The Hubbards on socials