Posted by Fred Bambridge on December 31, 2017
Brighton is most certainly conjuring up a scene brimming with indie bands who are nonetheless making a name for themselves, with Fickle Friends, Black Honey and of course Royal Blood to name but a few, one can certainly expect even bigger musical things from the coastal city. One band who are doing just this are Yonaka, an alternative rock four piece who are undoubtedly on the road to success in 2018. Having already been tipped as a favourite among numerous music publications and blogs, Yonaka have already captured the attention of the industry. 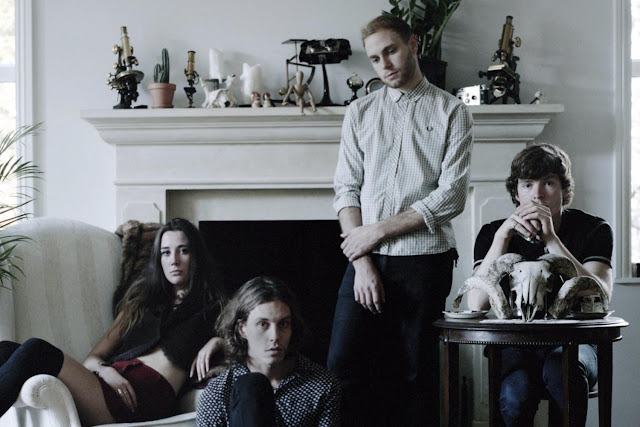 Yonaka, pronounced ‘Yoh-nuh-kuh’ describe themselves as being a band who create ‘dark alt pop with heavy riffs’ and rightly so. The band, consisting of Robert Mason on drums, Alex Crosby on bass, George Edwards on guitar and Theresa Jarvis on vocals are concocting a musical fusion like no other, which bring their uniqueness and immense talent to the forefront of what they do. Having been together since 2015, Yonaka have honed their craft and bring the most unforgettable live experience to any gig they play, whether that being a huge festival slot or at a small grunge bar, the band put on a show like no other - involving the crowd, emitting catchy tunes which are driven flawlessly by a heavy beat which permits the space to set alight with energy and pure excitement.

Their first single release ‘Ignorance’ in 2016 went mad on Spotify, reaching thousands of plays on a daily basis it was clear that Yonaka were bound for a bright future. Also in the same year, the band were supported by BBC Introducing, playing Radio 1’s Big Weekend in Exeter and following this they released their heavier single ‘Drongo’ which again, blew up massively on the internet. Having been snapped up by Various Artists Management (The Libertines, Charli xcx, Tom Grennan), Yonaka were in good hands in order to conquer the music industry. In January 2017, Yonaka signed a record deal with Asylum Atlantic Records (part of Major Label Warner Music) and braced themselves for the incredible year ahead. 2017 has undoubtedly been a huge year for the band, playing numerous renowned festivals such as Reading and Leeds, Download Festival and The Great Escape and embarking on numerous UK tours. Also, the release of the more soul-laden but heavy track ‘Wouldn’t Wanna Be Ya’ in the first half of 2017 really set the band on the right note for the busy year. Their Radio 1 Maida Vale Session was certainly one to remember. 2017 also saw the release of the band’s first EP ‘Bubblegum’ which received a great response online and certainly in London where the band performed two fully sold-out EP release shows at The Lock Tavern in Camden.

The all-round support and hype surrounding this band is something else and certainly highlights that there is something special in the air for Yonaka, they are on the cusp of becoming something HUGE in 2018. Having already been booked for European Festivals such as the incredible BBK Live Festival in Bilbao and preparing themselves for their biggest headline show to date at The Garage in early February, one cannot deny that big things are coming for Yonaka. Make sure to catch them at a small venue near you whilst you still can, you won’t be disappointed!