Posted by Chris Graham on July 08, 2018
The electronic music duo, Peking Duk (Adam Hyde and Reuben Styles) met at a skate park during an unlikely meeting at their hometown of Canberra. The pair have released one great song after the next, with songs working with the likes of Elliphant (“Stranger”), Icona Pop (“Let You Down”) and AlunaGeorge (“Fake Magic”).

The pair recently released their latest mini-EP featuring no one other than Sarah Aarons, also known as one of the driving forces on hits like “Stay” or “The Middle”. Then they released a whole mini-movie for us. And now, they have something even bigger and better to announce: Peking Duk are going on tour and are ready to take over Europe and the UK.

Adam Hyde and Reuben Styles took some time off in between their current US tour to talk to Its All Indie with all about which artists they would love to collaborate with, dream collaborations and what we can expect with their next Europe and UK tour.

Hey guys! How are things? How’s the tour going?

Things are damn good! We just arrived in Boston, Massachusetts. We go to Independence Day tomorrow. We’ve heard Boston is the best city to spend Independence Day, so we’re pretty excited to check it out and see what’s going to happen. The tour though, is going great. Easily our best tour of North America, it’s the best reception we’ve ever had. Each day we’re seeing on Twitter, Instagram and everywhere just how stoked everyone is with our show. Someone just tweeted us about an hour ago saying “Hey, your show in Denver was that good that I’m flying to Seattle to see you again before you leave North America”. There’s a lot people very excited and its making us so much more excited. So, we’re going to have keep doing this more – bigger and better every time.

You’ve collaborated with artists including AlunaGeorge and Nicole Miller in your past releases, if you had to work with any artist who would this be? And why?

We get asked this question a lot and the answer is always the same because there’s too many talented people we want to work with. Obviously, there’s big dogs like Damon Albarn, Kanye West, Julian Casablancas, Daft Punk and Kendrick Lamar. The list could go on and on as far as big dogs go, but there’s a lot of other talent out there as well. The list is obviously too long to name. But as far as right now doing a really simple, kind of weird Tiga-esque dance beat for Pusha T could be really fun. I don’t know, just thinking out loud. Too much talent out there and we’re down to working with anyone dope, as long they’re down to work with us. It’s all love.

The video for ‘Reprisal’ is stylistically incredible, could you give us some background on how it all came together?

So, Adam and I had a couple songs in the bank which felt they were in a similar style. Especially lyrically, they both had this theme of some bittersweet reprisal. And we decided let’s put them together, put the two songs into one video clip. We sat down with one of our best friends Ryan Sawyer who is a videographer and director and we started riffing out. All 3 of us and our manager Ben. We just came up with random ideas on how we could link the two songs into one clip. As soon as we started talking about doing a little spaghetti western, it all just started, and the spit balling went into a free for all. Within minutes we had the storyline plotted out and only a week after we came up with it, we went out and filmed it. We’re so stoked with how it came out.

If you had to sum up your musical influences who would you put?

Individually, we have a lot of separate influences, but we come together on a lot too. Damon Albarn, Kanye West, I would even say Drake, Julian Casablancas and The Strokes. The influences though are endless and musically we get inspired by a lot of things that could be not so obvious. For example, we’re very big fans of 80s Japanese disco, very big fans of old blues and all these things we’re discovering that in ways can help reinvent ourselves and our love for music.

What new artists coming up would you recommend readers to check out?

Right now, there’s a dope band out of Nashville called Repeat Repeat. They were kind enough to join us on tour, this tour we’re on right now. They’re fucking incredible live and their songs are dope. Their destined for greatness for sure, really kind people as well. They smash it every time. So, make sure you check them out. Also, our homie Ben from Melbourne, Australia is doing some really cool stuff at the moment. He’s got some great music that he hasn’t yet released, so make you stay tuned on him because he’s going to be doing some great things.

There’s a dude called Kwame who’s a good friend of ours out of Sydney. I feel like he could be the one to break Australian Hip-Hop out of Australia. I wouldn’t even call it Australian Hip-Hop, that sort of already puts it in a box. Really dope Hip-Hop, he’s so young and produces so much for other artists and himself, he does it all himself. He’s like a young Kanye – a true visionary that dude. Joy Jacqueline is someone who makes me cry when I listen to her. She’s sort of being doing it for a while so I wouldn’t say she’s up and coming but I feel like more people should be listening to her. She’ll bring a tear to your eye and a smile to your face. 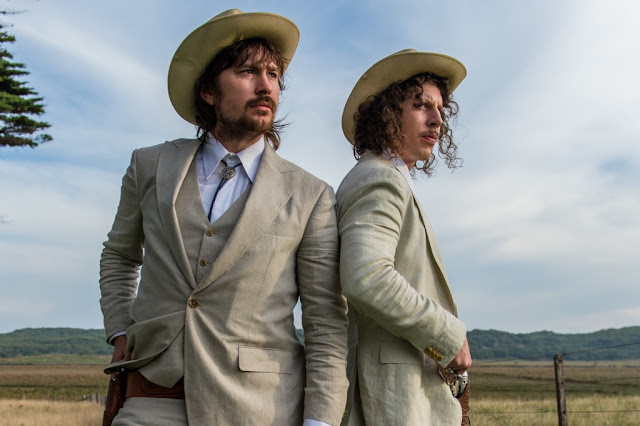 You’re in the middle of a huge tour in America following tour dates in Australia, is there anything different fans in the UK can expect in the September dates?

In our September tour of Europe, we are going to absolutely remove the DJ set out of our live show and it’s going to be an entirely live show with every instrument getting played. Something we’ve just started doing in the last couple of months, actually we only just started in America a few weeks ago. Our first live shows with no DJ set whatsoever, so it’s all beginning now.  I feel like it’s the start of a new chapter for the both of us and the start of a new chapter for Peking Duk. We can’t wait to share the new chapter of our lives with everyone in Europe for the first time in September.

If you had to pick three tour essentials for bands who are about to set out on an international tour, what would they be?

That’s a very good question. I wish we knew the actual answers to that. I would say Advil is very important for hangovers if you’re a band that drinks. ibuprofen is the drug we’re talking about just when you’re hungover and you’ve got to get stuff done like sound check and load-ins. Definitely helps on the head when you’re hearing loads of loud noises. Also, ArmaForce is another great vitamin, I would just say multi-vitamins in general to keep that immune system strong. Because with all the lack of sleep, your immune system is already weak, so last thing you want to do is lack any vitamins you might be missing while you’re constantly travelling around. Obviously, toiletries but that goes without saying. I guess another thing is sunglasses because not only do they make you look cool, but they help on the sore head regardless of whether you drink or not. If you’re tired, nobody likes bright light in their eyes especially when you’ve got a few things on your mind and things to do that day. It’s good to get your calm moments when you can. With sunglasses, you can shut your eyes, and no one will even know. Airport lights are deadly.

Do you get some time off in the UK to explore the cities you’re playing? and if so where and what are you planning to do?

Last time we were in the UK, we got to see our very first premier league football match. West Ham vs Arsenal, it was nil all game, but it was absolutely riveting. We had some hooligans behind us and I’ll tell you what, they made the game so fun and so exciting. Nothing about that game was boring despite it being nil all game. Hopefully, we can do that again, I would love to see Liverpool, one of my favourite teams in the world play. I would love to maybe go to a game when we’re in Manchester, go see Manchester United or Man City – the greatest team in the world supposedly. I mean they did well last season. I would love to see some premier league games in England. It would be cool to check out a game in Darby where our front of house engineer is born and raised. He’s a countryside Englishman who can’t handle even a slight piece of Coriander or a little bit of Chilli on a taco. It’s a beautiful thing, so he must come from a beautiful place. But you tell us some good sights to see and we’ll come with you and have fun together once we’re over there. Look forward to it.

Check out their full tour dates below